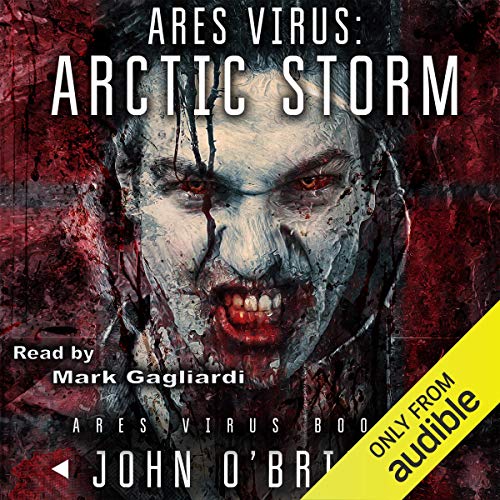 What would happen if a viral agent was released on American soil? How would local agencies react? How would the military respond? What if it was one of their own? Would they own it or attempt to cover it up? If a major operation was jeopardized because of the release, would that alter any of the decisions? A potent viral agent, created to destabilize a region for forces to move in and clean up, is accidentally spilled in a metropolis. Those infected serve only to afflict others through any means.

As forces move in on the beleaguered city, Sergeant Brown has to make his way through roving bands of the infected in order to escape. Will the ring close before he can reach safe grounds or will he and others he finds be added to the final tally?

What listeners say about ARES Virus

I wasn't sure where the story was going at first but I can't wait to continue. At first I thought it was going to be about a couple of cadets trying to get out of an infected town. Then it turned into another plot twist on top of that one and now we see into the mindset of the person responsible for the virus. Then the virus spreads.
Then on top of that one we go to a story about one admitted terrorist (?) just trying to survive after being unfairly blamed for the whole thing going from country to country to country. Then the virus spreads.
Starts out with a lot of action and doesn't stop. Just enough character build to get into the thinking process of the people involved. I really want to know how these stories evolve as I am beginning to care about each one.
Virus versus people versus government versus survival - all good!

Another John O'Brien story to scare the crap out of me. This zombie tale starts at Ground Zero and shows just how easily thus could happen. I couldn't stop listening!

SCARY PREMISE FOR THE ZOMPOCALYPSE!

First off let me say I love John Obrien...he is a talented writer, and a very nice man...This was a great premise and shows you how scary the government could get..deceitful and careless...and really cruel! However this book is written in 3rd person...and that ruined it for me...John's other wonderful series is written first person..and its great..so I was disappointed that this book was written in 3rd...and that just does not do it for me...I struggled till about half way through this book and it finally hooked me enough to adjust to the writing style...Most people will love this..but even though the story is completely terrifying...it was not my cup of tea!

Wow....I have read the book but I always like to listen to the Audible version as well. I was not disappointed. As usual, something horrific begins with a beautiful sunny day where everyone is so engrossed in enjoying the sun, friends, a good read under a tree or bench or even an impromptu picnic. A misread label leads to the unthinkable occuring, the release of an experimental, extremely virulent virus that quickly infects those within the immediate vicinity. The infected become enraged carriers of a hybrid rabies virus that has only one goal, to perpetuate it's existence with the host as the carrier attacking everyone it sees. Those that are bitten rise and continue the infection spreading it with horrifying speed. Sgt Brown, a soon to be retired has taken a simple assignment as the ROTC instructor for the small university. It's easy and he is looking forward a quick year and retirment. Unfortunately he is caught in the midst of those infected and his only hope to remain alive and uninfected is to leave the campus and possibley the nearby town. Along with him are two ROTC cadets that managed to also evade the ramapage. Along the way, he also finds a little girl and convinces her to tag along. Brown knows what is happening and what will happen next once the government and military decide on the best course of stopping the virus and it will not bode well for an survivor in the town or anywhere close to it. He leads them out, avoiding the hordes of infected and the military and all their might as they attempt to contain the problem they created. John O'Brien has once again given us a character we can like if not relate to as he quickly takes steps necessary to ensure their survival as well as the knowledge of what can and will happen if they are found close to the town.
Meanwhile the one man that had warned against the move of the virus is now under the gun to stop it from spreading regardless of the consequences to any survivors. He cannot afford for the virus to get past his blockade. Great story with good storyline and scary enough to make you think.......like I said, I loved the book, the audible just brought it that much closer to home...great job John O'Brien...

Definitely worth the time!

I wasn't sure what to expect with this book, the author and narrator are fairly new to me, however I was pleasantly surprised at the complexity of this story. There was a significant amount of emotional investment in this book/characters on my part. I can base this on how angry I get at the characters and the situations they get themselves into. It had the right amount of humor and drama, I laughed out loud at many a punchline! I'm about to start the next installment and am looking forward to the twists and turns the journey will take.

Not exactly Zombies, but something to be feared non the less. This book is filled with action, compassion, and giggles. O'Brien sure did his homework from the CDC to the Military. The only complaint I have is that I have to wait for the next book.

You did it again. Awesome book! I can't wait for the next book to come out on audio.

I love the Middletown Books. This was one of my favorite stories from the book. I'm glad it has been expanded and narrated.

Would you try another book from John O'Brien and/or Mark Gagliardi?

Not sure. It would have to have been out a while and have received rave reviews from the large majority of listeners.

After it Happened set 3.

Did Mark Gagliardi do a good job differentiating all the characters? How?

Was ARES Virus worth the listening time?

No. I've actually stopped with 3 hrs to go.

Didn't like the narrator at all. There was zero relationship built between the characters. Every male character sounds exactly the same. Hard to tell when the story switched from one person to another as they all sounded the same.

Obviously i'm in the minority as many readers love this book but it really just did nothing for me.

I really enjoyed the story till the end, so much so quick, left behind the characters built up so well, then crash from inward view to just a short event ending. The narrator was good, other than I found his gasps for breath between sentences to be annoying, have never noticed that before. But, Glad I read it, it was worth that bit of annoyance.

Although a good narrator, there is no differentiation between characters.
You can go from a tough marine, to a 10 year old girl with no change in pace or volume. I found myself jumping back to see if I missed a bit of the story

I'm a big fan of John O'Brien's A New World series. For fans of that series I'd say this is similar but has a stronger emphasis on the military side of things. I enjoyed the story. It had great characters and an interesting arc. I recommend.