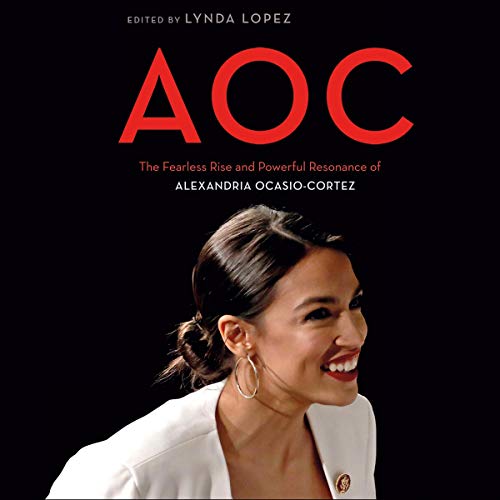 From the moment Alexandria Ocasio-Cortez beat a 10-term incumbent in the primary election for New York’s 14th on June 26, 2018, her journey to the national, if not world, stage was fast-tracked. Six months later, as the youngest congresswoman ever elected, AOC became one of a handful of Latina politicians in Washington, DC. Not yet 30, she inspires adulation; she represents her generation, the millennials, in many groundbreaking ways: proudly working-class, democratic socialist, of Puerto Rican descent, not to mention of the Bronx, feminist - and a great dancer.

At the same time, the outpouring of vitriol against her has been formidable. But with her social-media savvy and sharp wit, she fights back, creating memes and quotable lines like "Don't hate me cause you ain't me". She goes viral whenever she takes the floor, inspiring young progressives and frustrating conservatives.

Lynda Lopez's AOC investigates the many meanings of this remarkable young woman. Contributors span a wide range of voices and ages, from media to the arts and politics. Published on the one-year anniversary of her leap to power, this audiobook will be a must-have item for her many fans.

What listeners say about AOC

This is a very indirect book on AOC. It offers an intimate insight into the issues Latinas expirence in America and why the rise of AOC has had such an impact. It is written by people who support or have been inspired by her, offers good knowldege on AOC as an indiviudal but ultmimatly looks at her role in a larger political envirnoment.

Not what i was expecting, but still 10/10 Goldblums.

This is not a biography but a collection of essays by various people explaining what AOC political rise means to them. Therefore, it is hagiographic. There is a range of people from journalists to novelists such as Natalia Sylvester. Pedro Regalado explains about the Puerto Rican activism in New York.

I was looking for information about AOC to obtain a better understanding of her and what she represents. I was impressed by her when I saw her on T.V. during a congressional hearing questioning a person. I also was impressed when I saw her rebuttal to a male congressman for his sexist remarks. I enjoyed reading all the different perspectives of AOC represented in this book. After reading this book, I do have a better understanding of what AOC represents.

The book is five hours and twenty-three minutes. The book was narrated by Cary Hite and Marisa Blake.

I thought that I was going to be listening to a book about AOC as titled. Instead, a large portion of the book is about the author's life.I was confused at times as to who was being discussed.

Very inspiring to have more knowledge about a champion for economic justice, our climate crisis and racial equality.

Not a biography... Buyer beware!

I'm very disappointed. This book is basically a bunch of fan girls writing about how Awesome AOC and her policies are. I wish I'd looked closer before buying.

this is barely about AOC

I don't get why the book is titled AOC. I'm almost one third through it and the author speaks more about herself that AOC. And I certainly didn't buy this book to read about the author's squibles with other women. very misleading title and awful content. If you're looking for a book about AOC, I suggest looking elsewhere.

Not for everyone, but I like AOC. Some of the essays on her, basically it’s all essays, are good, but some just pander to not trigger anyone.

It’s okay but doesn’t tell you anything about AOC that isn’t widely out there already.

A terrific insight into being Latino in America and the rise of a Young lady who sees the world as somewhere to use her love and energy for the betterment of the lesser classes. Loved this story by Lopez on her life and her fight to be who she is.