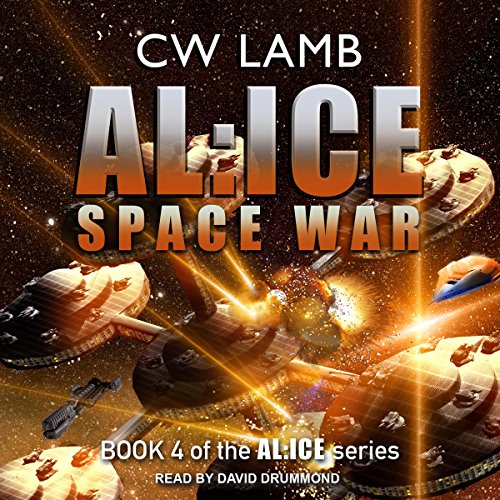 Colonel Jake Thomas has found himself at the edge of disaster once more and managed to pull back from the brink. Defeating the alien armada without the use of a re-created doomsday device was a great victory. However, it was a victory tainted by the realization that a new NeHaw leadership was in place, and they knew how to fight a war in space. He was once again fighting a two-front war, one in space and one on the home front. With cities around the world starting to emerge from the darkness, it's troubles at home that have Jake the most challenged. Besides a pregnant Sara, Jacob and Gemma divulge a secret of their own, and it's one that has Gemma's mother none too happy.

what happens when you sighn a contract for a fourth book in a story youve lost intrest in.

The title Space War is a bit too presumptive. There is some fighting, but it seems that stuff mostly blows up on its own. Our new space soldiers are out on different worlds sabotaging the aliens, but the battles aren't really battles. Mr. Lamb needs to read a few more Jack Campbell books to learn how to write space combat.

This volume doesn't advance the story much, and ends rather abruptly with a hint of something completely new and unprecedented in this series. Although I have ranted and raved about the problems in each book I keep coming back. I was hooked in the first few chapters of the first book. Jake is a good main character, and Alice is a great computer to have around! But there are too many frustrations in the writing to love it all.

Mr. Lamb needs a professional editor to correct his hick writing:
"I hesitate to mention (something)," he said hesitantly.
The containers were rectangular in size. (Rectangle is a size?)
The unconscious form of the attacker was drug off.
"The ability to construct such things still ARE highly protected."

I spat out my Pepsi over the description of the new space suits' ability to handle defecation:
"All you had to do was dig a little HOLE, squat, do your business, and then cover the HOLE. On the WHOLE, it was the easiest way he had ever gone in his life." I'm sorry, you just don't do that.

The narration is awful. Mr. Drummond has a tight voice that is unsuited for women's voices. Lamb's women are already annoying, but Drummond has them all sound the same--whiny. Unless he is doing an old stuffy man's voice (Col. Banks), all the men sound the same. Ivan's accent kicks in a few words into every sentence, but not quite right.

But there is something compelling about the plot that makes us give this writer's first series a pass on all these things because we keep wanting to find out what happens. So, Mr. Lamb, I will keep reading, but I will also keep correcting.

No one can die or even get hurt

there's no urgency whatsoever to this series. any situation that is presented has almost no substance

I stumbled across this set early this year, and have loved it, but the endings! They leave me wanting one more chapter.

Audible need to set up there own review board. There is absolutely no way the reviews of this book can be so high, it has to be self promoted. Take my word for it, its bad!

I like the concepts of the AL:ICE series but the author needs to work on his writing. Show don't tell and self edit are missing in most of the books. If it doesn't support the plot leave it out, show us emotions and feeling don't constantly tell us. I can't relate to bland descriptors but make me see through the characters eyes and heart and I'm yours.

It's a fun book. Not too heavy.

These are great audio books since you can just enjoy the story and interesting characters without getting deep into the underlying science.

If you need pristinely accurate science before your can enjoy a book, then this one isn't for you.

A let down because of the abrupt change of the story. I was left believing that Mr. Lamb just wanted his final check.

Great series and a real joy for science fiction fans.

C. W. Lamb has created a fantastic series. The various species are well defined and original. As the story line builds, it all fits in a believable and exciting plot. Science fiction fans can include this series as a "Must Read".

The audio production is excellent as the characters are brought to life by "David Drummond" with voices that fit each personality in a lifelike performance. I look forward to more from this narrator.

very enjoyable with a masterful conclusion, I would have preferd it to last a few hours longer.

a good book in series. but I must say I could wish a bit more from this one, the other books in this series was much richer and more interesting. still a good book to read