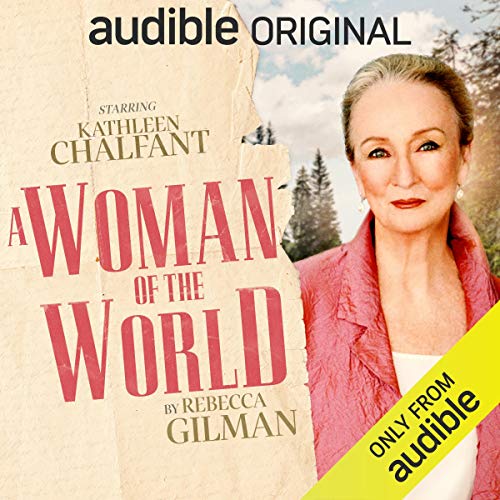 A Woman of the World

Meet Mabel Loomis Todd, an inspired conversationalist who routinely invites scandal and ignores the rules of 19th century society. Now in her 70s and living on Hog Island in Maine, the outspoken writer and editor is holding court, entertaining us with musings on her colorful life, spilling secrets, and revealing the truth about how she turned Emily Dickinson into a household name. In an intriguing performance, Obie Award winner Kathleen Chalfant embodies the spirit of a fascinating woman whose legacy is forever linked to one of America’s most celebrated poets.

A Woman of the World was originally produced by the Acting Company in association with Miranda Theatre Company. Written with the support of an artist residency at Hog Island Audubon Camp.

What listeners say about A Woman of the World

Some stories really aren’t that interesting.

Just because the characters (real or fictional) have connection to a famous person doesn’t mean they’re that interesting.

It was a waste of my time. Which is saying a lot considering all I have is time.

Not worth your time

please step it up Audible, please! I love history including American literary women’s history, but all of this was boring and pointless

Profile of a Raging Narcissist

I don't have any knowledge of whether this is pure fiction or has some basis in truth. If I cared, I would look it up. All I know is that I despised the "main character." She's as self-absorbed and narcissistic as they come.

Fabulous! Musings on the private lives of very public figures, by a woman who has seen it all. I don’t know how much is true and how much embellished, but I loved the performance. It was witty and poignant — I savored every word like a fine confection. Love love love! Audible Originals has really stepped up their game lately.

Really obnoxious format. Sometimes offensive, for example insinuating that a woman is “unnatural” if she chooses not to have children. Really tried to listen to the whole thing, it’s only an hour but it’s an hour, but it was really tough to get through.

A must read. Makes you think, laugh, scream, and holler. The best revenge against snobs and snobbery.

You really need to read the biography of this woman first. This story is based on facts but it doesn’t make much sense if you don’t know anything about her beforehand. I wish I had known that. The narrator was excellent.

The story runs as a one woman show. I had originally thought this was a true story, I must not have focused while reading the description. it is a wonderful take told in a voice of an old woman who doesn't give a hoot how her listeners feel about her. I enjoyed it very much.

Woman riding Emily Dickinson's coattail all her life tells stories that prove she really needed Dickinson to be interesting. Narrator did an amazing job of holding this one together though.

Sort of a random stream of consciousness

The tale rabbit-trailed all over but it was an entertaining path. A reasonable length for its meandering.