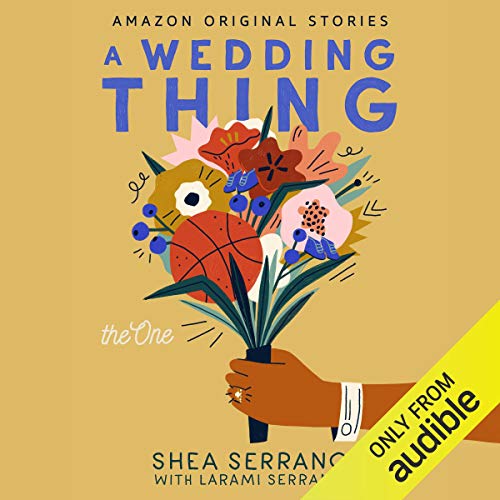 A hilarious story about a change in plans - the most harrowing, beautiful, and unforgettable day in the life of the #1 New York Times bestselling author of Basketball (and Other Things) and his miraculous wife.

Two days before Shea and Larami Serrano were to be married, four months into her pregnancy with twin boys, she went into labor. Stuck in a hospital room, fearing the worst, and dismantling a year’s worth of preparations in a matter of hours - the couple decides that the show must go on. Told from Shea’s and Larami’s dual perspectives, this memoir shows the powerful bond that can arise from adversity, a sense of humor, and mutual trust.

Shea Serrano’s A Wedding Thing is part of The One, a collection of seven singularly true love stories of friendship, companionship, marriage, and moving on. Each piece can be read or listened to in a single sitting, with or without company.

What listeners say about A Wedding Thing

What an amazing and surprising read by the Serrano family! Loved every second of it and felt the emotion the family went through. Thank you both!

I don’t know why I even got this. First at 30 minutes (seconds), there isn’t much the author could do, especially since this was more like a story you might bore your children with as they get older. Don’t waste a credit to read it

This is a beautiful story. As someone who lost a wedding this year, this story gives a whole new perspective on life.

It felt like they were telling us the story over dinner. beautifully narrated, open, & honest.

My son and his fiancée are getting married tonight in a clearing off a hiking trail in Georgia. With 2 friends, an officiant and a photographer. Because of the COVID 19 pandemic, two months ago they cancelled the wedding they had planned for today with family and friends in Oklahoma City. Before the wedding, they will join a protest march in support of Black Lives Matter. This morning I talked with them and shared in their excitement and joy of their wedding day. They will be FaceTiming me in Kansas after the ceremony. They suggested I listen to this book, as they listened to it earlier, so that I could understand even more their feelings about their wedding thing. Thank you Serranos for this wonderful gift.

I so wish I could give this an overall five stars! But the f-words are so jarring and offensive! And now I can’t let my grandchildren listen. Nor can I share this with the young girls I know who adore a romantic story. The love here is palpable! The story is amazing! The artistry of the words is spellbinding! So I do not believe that you were unable to come up with a few other descriptive words to express your dismay so that your powerful love story could be shared with so many more people. Whoever said that offensive words are “artsy” and “real” should be sent to a juvenile time out corner! Once while teaching a high school class, some students asked my daughter, who was also in the class, “Seriously, doesn’t your mother cuss at least occasionally!” She affirmed she had never heard one word from me. Incredulously, a student asked, “What do you if you hammer your thumb?” Holding my thumb, jumping up and down and spinning in circles, I screamed out at the top of my lungs, “Oh that hurts! It hurts like ultimate agony! Oh, oh, when will this get better! The pain shoots from my thumb to the end of every nerve and threatens to consume me with fire...”. Then I abruptly stopped and calmly said, “And I keep shouting like that until I feel better! Cursing is for the unintelligent!” I grieve because I will not start another book of yours and I know that I will lose some good stories. But I can’t risk the garbage that would pollute my mind!

Did not care for for .Not my kind of book. Will look for another by her and see if I like it better

Liked how the story was told from both perspectives. People are more resilient than they imagined. Nice narration.

Incredible, worth your time. Only complaint is that it was over so fast. Love his other books too.

I enjoyed hearing this short story on a road trip. My husband doesn’t especially like audiobooks so we chose this short one as a compromise. Turned out that we both enjoyed it! Went by fast at 1.25 speed.