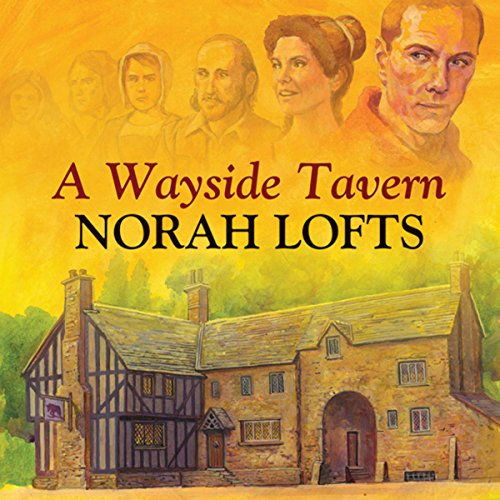 A Wayside Tavern tells the story of a Suffolk drinking place from the end of the Roman occupation of Britain, until the present day. The Roman veteran, crippled and left behind, worshipped Mithras, so the place became known as the One Bull and down through the centuries it became a clearing house for contraband, a miniature Hell Fire Club, a fashionable hotel, a mere pub. Across the yard, was the church of St Cerdic, king and martyr, who fought the Danes and was famous for the miracles performed at his shrine. His remains were lost in the Reformation but something remained. Inside the inn, despite all external changes, one passion raged – to retain possession.

What listeners say about A Wayside Tavern

An enjoyable story that jumps through history with some interesting characters and situations. I found the characters in the later chapters less developed and interesting than previous chapters. The later periods were rushed through and left me feeling like I was being hurried to the end. Jonathan Keeble performs admirably with a wide array of accents. I had just finished listening to Edward Rutherfurd's epic novel 'Sarum' before starting listening to this book;perhaps I would have enjoyed the novel more if I had waited. If you enjoy this book I recommend Sarum.

Not her best but still enjoyed the story. I really like her work, I only wish there were more on audio. I just ordered a bunch of hard cover books by Lofts but I never have the time to read them. Anyhow, I enjoyed this one, the jumping through time is interesting. I do like that you see how it progresses through the years and having a history laid out before you.

This is a wonderful read with many "surprises" along the way. The constant is the tavern and how multiple generations have used or abused it, and themselves. The secondary or mystery theme concerns the abbey and how it affects the lives of those associated with the tavern.

Love the Book, not crazy about the audio version

If you could sum up A Wayside Tavern in three words, what would they be?

Another wonderful trip through the centuries with Norah Lofts. I love her long sagas and the very realistic and often mixed emotions and lost legends that all of us come from.

What other book might you compare A Wayside Tavern to and why?

Bless This House was very simliar

I have read the book before and loved it, his reading was a bit too slow, making it seem to drag in a way it did not drag when read.

This was a good listen and although it could come across like a series of short stories, it was still enjoyable and tied in nicely at the end. I will buy more by this author.

Historical Fiction at its Best

I read this book in the early ‘80s and it always stuck with me. I’ve just listened to it on Audible and enjoyed it even more the second time around.

I really admire the amount of research Norah Lofts made to produce this book.

I had read this book many years ago, but I had forgotten most of it, so it was wonderful to listen to it again, fresh as if I had never read it before. Excellent narrator added to the experience. I would thoroughly recommend this book as it was enchanting from beginning to end

Very gloomy. Not a hint of any happy endings.

Misery, misery, misery. Every one of the characters either dies before their time, is killed in some way, or ends up having an extremely unhappy life. One sentence that rings out at me: 'A man must be master in his own house'. So he proceeds to be a tyrant and is hated by all around him.

Not quite up to Lofts' usual standard

What did you like most about A Wayside Tavern?

I love stories set around a building or a place, and going back in time. Nothing beats Norah Lofts House trilogy, but A Wayside Tavern is a short short version of that type of story.

Difficult to say. I can't realy point to any place in the novel. It all rushed by somehow and melted into one pot.

Which character – as performed by Jonathan Keeble – was your favourite?

I liked his Adam, a kind and thoughtful man. Keebles voice sounded just right. I always enjoy Keeples narration of Norah Lofts characters although his version of a kitchenmaid in A Wayside Tavern sounded just a little bit too naive-countrygirl. I say this with a grin on my face.

I wished Norah Lofts had made this novel into a trilogy. I felt, after each period, that there was more to tell. It felt like pacing through time and history, even like without a thread apart from it being the same family keeping the tavern.