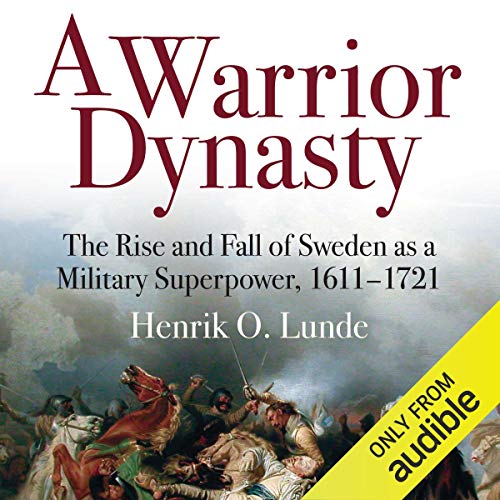 This audiobook examines the meteoric rise of Sweden as the pre-eminent military power in Europe during the Thirty Years War during the 1600s, and then follows its line of warrior kings into the next century until the Swedes finally meet their demise, in an overreach into the vastness of Russia. A small Scandinavian nation, with at most one and a half million people and scant internal resources of its own, there was small logic to how Sweden could become the dominant power on the Continent. That Sweden achieved this was due to its leadership - a case-study in history when pure military skill, and that alone, could override the demographic and economic factors which have in modern times been termed so pre-eminent. Once Protestantism emerged, via Martin Luther, the most devastating war in European history ensued, as the Holy Roman Empire sought to reassert its authority by force. Into this bloody maelstrom stepped Gustav Adolf of Sweden, a brilliant tactician and strategist, who with his finely honed Swedish legions proceeded to establish a new authority in northern Europe. Gustav, as brave as he was brilliant, was finally killed while leading a cavalry charge at the Battle of Ltzen. He had innovated, however, tactics and weaponry that put his successors in good stead, as Sweden remained a great power, rivaled only by France and Spain in terms of territory in Europe. And then one of his successors, Karl XII, turned out to be just as great a military genius as Gustav himself, and as the year 1700 arrived, Swedish armies once more burst out in all directions. Karl, like Gustav, assumed the throne while still a teenager, but immediately displayed so much acumen, daring and skill that chroniclers could only compare him, like Gustav, to Alexander the Great. This book examines thoroughly, yet in highly readable fashion, the century during which Swedish military power set an example for all Europe.

What listeners say about A Warrior Dynasty

An author with an idea but not the skills

At the outset of the book, Lunde explains the dearth of historiography on Sweden's waxing and waning military fortunes in 17th century, and takes a fair stab at explaining why that gap ought to be filled with in-depth archival research across Central and Northern Europe. He then confesses that he hasn't looked at these archives because he doesn't have the language skills, and that he will rely mainly on secondary sources (which he claimed didn't exist). In other words he suggests what a book on this topic ought to do, and then explains that he didn't actually write that book. Why bother continuing?

Would you ever listen to anything by Henrik O. Lunde again?

No, the writing is vintage 1st year grad seminar writing (and poor at that).

What character would you cut from A Warrior Dynasty?

I would have subbed the author out for a competent historian.

The author has written a thimy veneered Hagiography and not an academically sound or factual History of the dynasty nor periods he covers. His perfunctory readings of secondary sources and his specious argumentation throughout tarnishs any actual merit of the work. In constantly reminding the reader his space is limited, while often taking paragraphs outlining his chapters or retreading already covered ideas, he essentially cops out on making any sort of whollistic and convincing historical narrative out of the short, albeit complex, time period he chose to cover.
TLDR; This is a really badly done history\pop-history book. Look elsewhere for knowledge

If you want the numbers, dates and a narrative for all the engagements in the wars Sweden waged for 100 years, starting with the 30 years war in 1630, this delivers. It does not give much sense of the reasons behind the war, or any of the personalities involved. In keeping with that, it is read like a very long list, very flat. Not what I wanted or expected, but I did listen to it all. Not completely sure why, but it had some strange attraction as background noise. I did learn more a lot about the battles and tactics.

This is not a bad book at all but it only deals with the military aspects of the dynasty and doesn't give you a full picture of what life was like. I think that if it had dealt with everyday life more and how the country was formed into where Sweden is now it would have been a far more captivating read. As it is, the book just comes across as an almanac of different non connected battles and historic written events, which unfortunately makes it feel quite shallow. That said this is a great book for military buffs who just want to have a reference for military events.

Just too academic for me. Though it is Interesting. Place names were a problem. I wanted to learn more about that part of the world. Maybe I should look for something more basic.

Not good for audio

Sweden and this era in history has been too long overlooked. I simply could not follow the main themes because I drowned in detail of day, time month for every page. Political, economic, social analysis I would really have appreciated.

I’m not sure what I was expecting, but this is a purely military history of Sweden in the 30 Years War. There is very little on the context for the war, what else was going on at the same time, etc. It is very dry; you can practically see the bullet points. And an audiobook is not the best way to follow all the marches, battles,etc— I might have done better with maps in front of me. I finally gave up with about 4 hours to go.

This is not really a good story for an audiobook, unless you have extensive knowledge of the geography of the Baltic area. The author makes little attempt to assist the reader in placing events.

What made the experience of listening to A Warrior Dynasty the most enjoyable?

The fact that I am Swedish but I felt detached from Swedish military history in particular. This was a nice partial filler of that void.

All the conflicts and the actual success and reverance of Swedish Kings and Generals.

Which character – as performed by Mark Ashby – was your favorite?

When I realized the impact of the Carnage in Stockholm and the extent of the Danish-Swedish conflict.