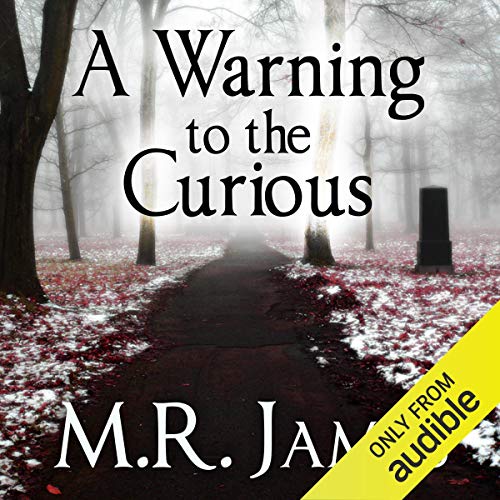 A Warning to the Curious

A Warning to the Curious

The story of Paxton, an antiquarian and archaeologist who holidays in "Seaburgh" and inadvertently stumbles across one of the lost crowns of Anglia, which legendarily protect the country from invasion.

Montague Rhodes James was a noted British mediaeval scholar and provost of King's College, Cambridge (1905–1918) and of Eton College (1918–1936). He is best remembered for his ghost stories which are widely regarded as among the finest in English literature.

One of James' most important achievements was to redefine the ghost story for the new century by dispensing with many of the formal Gothic trappings of his predecessors, and replacing them with more realistic contemporary settings.

"Montague Rhodes James has an intelligent and scientific knowledge of human nerves and feelings; and knows just how to apportion statement, imagery, and subtle suggestions in order to secure the best results with his readers." HP Lovecraft.

Actor David Suchet is best known for his definitive portrayal of Hercule Poirot, the Belgian detective created by the legendary mystery author Agatha Christie, in a number of international television productions. He narrates his story in Poirot and Me.

What listeners say about A Warning to the Curious

Wonderful! I loved it!

I didn't know this story existed and I played a PC Game called The Lost Crown.
It involves the mystery of the crown, ghost hunting, and the Agers!
If you liked this story, I suggest playing that game!

Also, David Suchet could read the phone book and I'd listen.

Suchet, perfectly and deliciously, captures the tone of the M.R.James stories. If only he would record them all!

Suchet does a good job with this story- M.R. James ghost stories are really a 'story within a story..' so the
elegant writing suspends your demand for authenticity because, you the reading, buy into the tale told..
this is quite a tale, but the narrator (actor) isn't as good with James tales as Derek Jacobi.

I am really enjoying the stories by this author and read by this narrator. I am looking forward to finding more!

What did you like most about A Warning to the Curious?

As I love David Suchet, I just admired his perfect diction and his dramatic presentation of the story.

I just felt sorry for the poor curious man.

Have you listened to any of David Suchet’s other performances? How does this one compare?

It is close to impossible to say that David Suchet would ever cease to be perfect in any of his performances. This was as good as all of them.

I have other James' books by David Suchet on my list and cannot wait to listen to them.

Good story delivered by a magnificent actor. What a fantastic price to pay as well.

David Suchet does it again. That perfect deep voice can keep me happy for hours & hours & hours. You will enjoy this one as David transforms this excellent M.R.James story as it was meant to be put over. A good & clear interpretation taking you into the depths of Spooky spooks. I love it & you may love it - hope you do. This is Literature at its best.❤️Fantastic

A chilling tale from The Master

As a child the highlight of my Christmas television viewing was the M R James ghost story. It is hard to imagine anything more perfect than his tales of musty old academics having chilling encounters with 'the other side'. M R James used to tell his stories at Christmas gatherings in Cambridge university. If you close your eyes and listen to David Suchet relate this chilling tale you can almost imagine being part of the Cambridge set.

This is the one with the three crowns and the track of a foot.....one that showed more bones than flesh. Brrrr....

What did you like most about A Warning to the Curious?

What was one of the most memorable moments of A Warning to the Curious?

None. This is a short traditional ghost story - a whole unit. No surprises here and perhaps predictable, it is the style and the reading that make it enjoyable.

Nope, no laughing, no crying, no trembling with fear,

There is nothing new, surprising or shocking in this very tradittionally told tail. Nevertheless it is well written and beautifully read making it a good listen when you have a little time to kill

Story set in East Anglia where I live which peaked my interest. Good short. David Suchet has a mesmerising voice.

A wonderful classic beautifully read by David Suchet. Never fails to raise the hairs on the back of my neck.

a warning to the curious

This is a run of the mill ghost story. Nicely read although please don't use an East Anglian accent if you can't get it right.

doesn't work :( just a loading screen. all my other books are playing fine. ergh