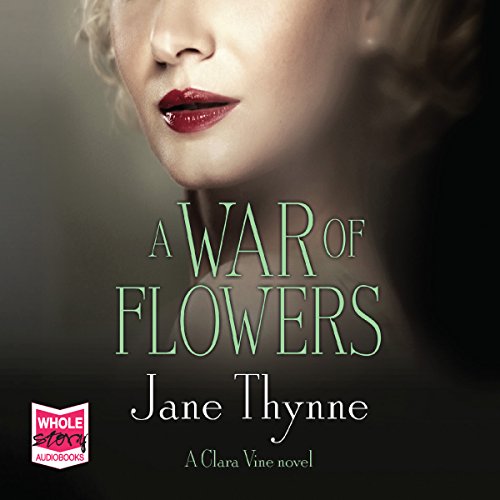 A War of Flowers

A War of Flowers

August 1938. British actress Clara Vine is in Paris to film her latest movie, mingling with society and passing snippets of information to her contacts in the British embassy.

When Clara is approached by an undercover British operative who asks her to befriend Eva Braun, Hitler's girlfriend, she knows she is putting herself in danger. But Clara will do everything in her power to protect her country.

What listeners say about A War of Flowers

Addictive series but watch out for duplicates!

This is a very engaging series, but it is very frustrating to try to get into a series when the Book 1 and Book 2 are not available as recorded books in the U.S.--- Audible offers Book 3 under two different titles (A War of Flowers and Scent of Secrets) and Book 4 under two titles ( In Pursuit of Pearls and Faith and Beauty) which is confusing--it looks like Audible offers four titles in the series, and in reality it is only two. Readers should be advised to check the length of the books to avoid re-purchasing the book you just read!

What other book might you compare A War of Flowers to and why?

It is in the same time period and flavor of The Milliner's Secret and The Beast's Garden. In nonfiction, Erik Larsen's "In the Garden of the Beasts" covers much of the same factual material.

Have you listened to any of Julie Teal’s other performances before? How does this one compare?

I had not listened to Julie Teal before and was impressed with her ability to clearly delineate the characters without resorting to silly voices.

Central fictional characters are well rounded and plausible and the real life figures slot in well. Some twists and turns and enough interest to keep you listening.

This series is sooo good I’m trying to resist listening to them all in one sitting to extend how long I get to enjoy them! I find the interwoven historical details very interesting and the pacing is superb. There are the occasional missed edits in the audio, but nothing too distracting.

I thought the narrative was great and really aided the delivery of the story. I loved loved the first 2 books in this trilogy but found this one overly long with not a lot going on I would read another book by this author but could not recommend this one.