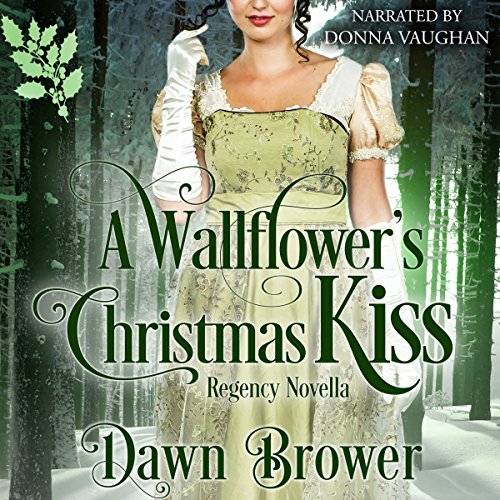 Have you ever dreamed of a Christmas wedding?

Spinsterhood has never looked so good, but unfortunately even that won't save Lady Juliette Brooks. Her father's arranged a betrothal for her to a brute of a man. She has one choice left - force the Duke of Kissinger to honor a long ago promise to save her.

Grayson Abbot, the Duke of Kissinger, does not want to marry Lady Juliette. He doesn't want to marry anyone. But he did make her a promise, and he doesn't go back on his word. So he reluctantly agrees to run away with her.

They set off on an adventure during the Christmastide season. As they race to Scotland they experience delays, cold weather, and a friendship they'd almost forgotten about. Will Juliette finally find out what it's like to be kissed, and in return, win the duke's heart?

What listeners say about A Wallflower's Christmas Kiss

Omg this narrator took some getting use to....she was flat at times and almost put it away. The storyline was good 👍

Enjoyed the Audible so much!

Loved the story. Characters are wonderful. Narrator did a good job - but did have to put the speed at 1.25x. Otherwise the slow story pace was too slow. Details are wonderful. Story is intriguing- held my interest from beginning to end.

A promise kept, both of them benefiting.

Two young people, grown together due to isolation, then separated by a parent's need to dominate. A promise to aid, when asked. Then the need, the asking and the response. The end, more than either of them would have believed. A great tale, with drama throughout.

Oh my heavens, I couldn't even get through the first chapter. Yes, yes I do understand that the author is trying to put a distance between the two main characters and using it the "problem" to keep the two apart. But if her father is an Earl and his father a Duke. the two families who seem to be that close, close enough to do celebrations together. It would be way more likely for the families to already have them be betrothed. Or at least making sure they stayed friends in hopes that they would wed. The logic being used would work better if their status was more distant I.E. a squire's daughter or son being friends with a Dukes/Earl's daughter and or son.

I received this book for free for a honest review. this book was very well written. the storyline flowed and stayed together. the characters had personalities and were brought to life.

I really struggled with this book. if it wasn't on audible escape and I had to pay a token I would have returned the book. the book has so much ( way too much) inner dialogue in-between the plot. it's so much dialogue that it takes away from the story. I do believe that the story has promise if not for all the needless dialogue. the performance is one of the worst I have heard. the voice actor does not differentiate between the different characters. it's really hard knowing who is speaking.

this book was great. the story was short and sweet. it is a clean romance. since it is short, there isn't much character development but I didn't mind that. it is part of a series. I am going to go listen to the one before it too since it is part of. AE. I would love to listen to the whole series but at this time, the rest are not part of. AE or KU. the narration was on point IMO. I slight British accent. I do love this author. I've listened to quite a few of her books. some of my favorites!!!

When ones father pushes you into marrying a man you don’t want which is unkind there is only one thing to do and that is to give a little push to a man who made a promise years ago. The author gives wonderful detail of an exciting adventure as they race to Greta Green to marry before her father can do anything about it. The narrator does a good job but repeats a few words. She gives emotion but at times seems dry. There were no volume changes, it was a clean audio. Most of her character voices were nice, a few I didn’t care for. The audio doesn’t flowed smoothly and I did find my mind wondering but I always came back. For the most part I enjoyed this audio but feel the narrator needs to be a little more natural it sounds at times like she is reading. Juliette is a quite sweet lady that does what her father said, but there is a different side to her nature that everyone is about to find out. Grayson is a little on the wild side doing just the opposite of what his father wants, but slowly and surly he turns his wicked ways around. This is short and fast leaving nothing out, I do wish the authors stories were longer. She gives a delightful story that you do not want to end. I just love the characters, the plot and how the story builds up to wonderful finish.

I absolutely loved the story. It was entertaining and kept my interest and made me want more. It was a book to finish in one sitting. Having read most of Dawns work it just keeps getting better. I also enjoyed the narration.

At a point you feel extremely sorry for Lady Juliette. Its like the world has set out to ignore her existance. But a promise by Lord Grayson to always be their for her is going to be her only saving grace.

I recommend this book to anyone who likes regency romances.
It is a cute story and and a light, fun read. Although it has Christmas in the title, it is not necessarily a Christmas story and can be read and enjoyed at any time of the year.
The narrator did a great job. I enjoyed the story and would certainly read more from the author in the future.

I voluntarily received a review copy.

A sweet, short story. I really liked how we saw the couple as children and the bond they had back then. It made their romance that more believable. I voluntarily reviewed an advance reading audio copy.