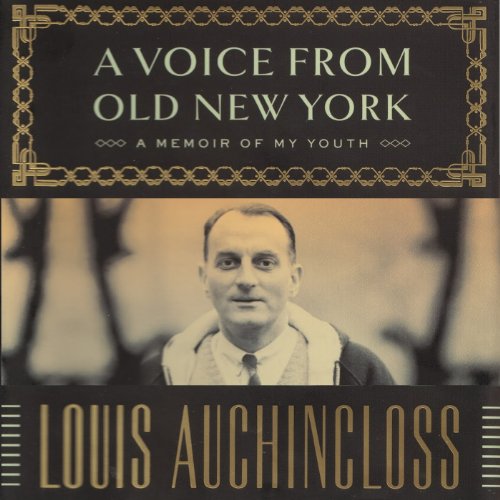 A Voice From Old New York

At the time of his death, Louis Auchincloss - enemy of bores, self-pity, and gossip less than fresh - had just finished taking on a subject he had long avoided: himself. His memoir confirms that, despite the spark of his fiction, Auchincloss himself was the most entertaining character he has created. No traitor to his class but occasionally its critic, he returns us to his Society which was, he maintains, less interesting than its members admitted. You may differ as he unfurls his life with dignity, summoning his family (particularly his father who suffered from depression and forgave him for hating sports) and intimates. Brooke Astor and her circle are here, along with glimpses of Jacqueline Onassis. Most memorable, though, is his way with those outside the salon: the cranky maid; the maiden aunt, perpetually out of place; the less-than-well-born boy who threw himself from a window over a woman and a man. Here is Auchincloss, an American master, being Auchincloss, a rare eye, a generous and lively spirit to the end.

What listeners say about A Voice From Old New York

I love Louis Auchincloss--his fiction is witty and surprisingly nuanced. So when I saw that he had a memoir, I snapped it up. And it doesn't disappoint. Auchincloss, the very model of East Coast establishment, writes a fast-paced story of his life. Unfortunately, I think he waited a little late in the day, because this is far too brief a look at his life. I wonder if his own reluctance to divulge too much is not just symptomatic of the class into which he was born. Auchincloss was the product of privilege and perhaps most surprising is his very dismissive take on his own talent. I personally think that he is a severely underrated author and think he deserves far more appreciation than he is afforded. What this book is good at is evoking a world where servants and wealth are the norm, and the life of the author is very much like that of a Bertie Wooster. Still, this is an enjoyable glimpse of a world where the inhabitants are completely sheltered from the cares and sorrows that most people experienced then and now. Perhaps the thing that I always wondered about was how a person so cocooned from the everyday lives of the 99% could show so much humanity.