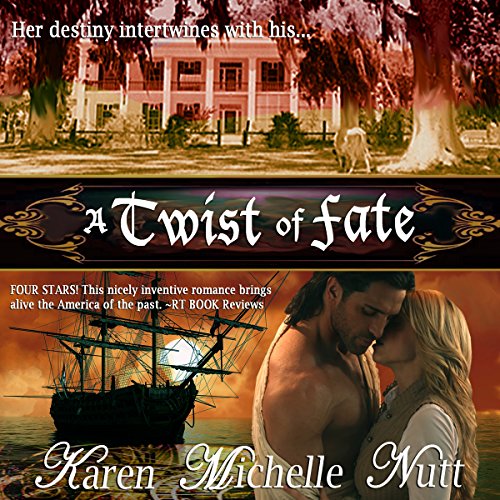 A Twist of Fate

Has a twist of fate sent her back in time? This is a question that plagues Arianna Ward when she wakes up to find her memory in fragments, like a long-forgotten dream.

Everyone claims her name is Annabelle. The year is 1814 and she's married to Captain Keldon Buchanan, a man who despises her. The more she learns about her life, the more she realizes why she's chosen to forget it. She's a liar and an adulteress. She doesn't understand why she wanted to destroy her marriage when her heart tells her she belongs with Keldon.

Keldon harbors his own secrets. He's the Highland Pirate and secrecy is the difference between life and death. He doesn't trust his wife, but he finds his heart softening to the woman his wife has become. If he didn't know better, he'd swear he's married to another woman and he's fallen in love with her.

What listeners say about A Twist of Fate

This is a charming, uncomplicated time travel romance set in South Carolina during “present day” and the American “Civil War” eras. The romance between Keldon and Arianna not only has to overcome “everyday” relationship situations, but also has to deal with the limitations of a different Century, along with trust, betrayal, and doubt issues. It is a lovely “Southern” story and has just enough history (the good and bad of the civil war) to delight history lovers.

So, sit back with some sweet tea or lemonade and enjoy the travel back in time.

An unusual twist of a time travel story. I am surprised at myself but I really liked this story.
I enjoyed the listen. Don't regret the credit for the book.

I loved this time travel romance!

He called her a wicked temptation and sinful pleasures! A Twist of Fate is a really good time travel love story with amazing characters and a very addictive storyline! What does fate have in store for them? I definitely recommend you one click this story and travel back in time to see for yourself!