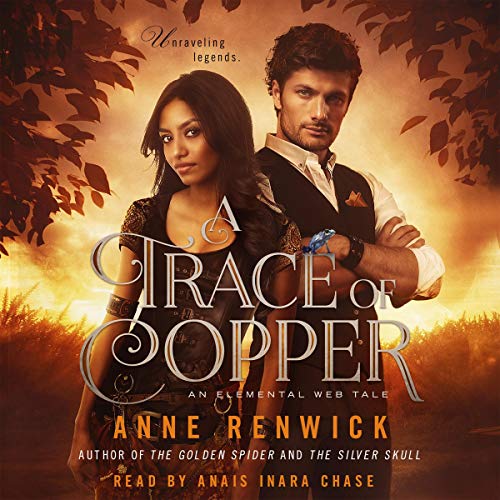 A Trace of Copper

A Trace of Copper

New recruit to the Queen’s agents, Dr. Piyali Mukherji is given a simple first assignment. Travel to the small Welsh village of Aberwyn and solve the mystery of a young woman’s blue skin lesion. A challenging task, for the alarming infection is unlike anything she’s seen before - and it’s spreading.

Evan Tredegar, the town’s pharmacist and the only man to ever capture her heart, knows more than he’s telling. Despite his efforts to push her away, her touch reawakens old desires. As more villagers fall victim to the strange disease, he’ll have no choice but to reveal his secrets, even if it means sacrificing his freedom.

Together they must move past broken promises, capture a rogue frog, and stop the infection before it spreads out of control.

A small Welsh village and a strange disease

In this tale that takes place in a small Welsh village, Dr. Piyali Mukherji is sent to investigate a blue skin lesion on a young woman and has to team up with a flame from her past, Evan Tredegar.
As the two work together to figure out what is causing the disease and how to help cure it they uncover a much bigger plot. With some amazing idea's, steampunk, 1800's etiquette (that the strong female character defies as often as possible) and a past that resurrects it self in a very steamy way, you will not be bored with this story. While not as action packed as Anne's the Golden Spider or Silver Skull novels this story is just as entertaining.
The narrator did a great job with accents and the difference in the characters as well as emphasis placed in all the right spots. I recommend this story for 18 years or older due to the intimacy of some scenes.