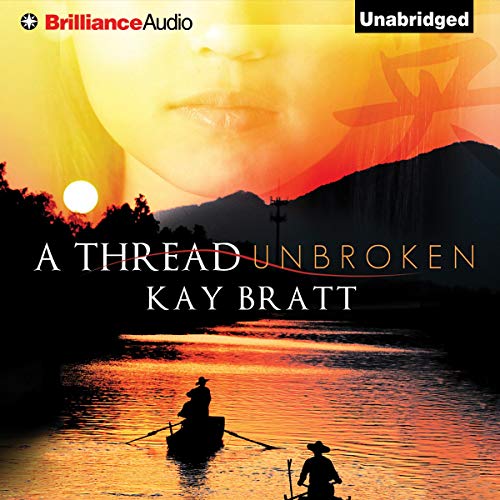 Many believe that those who are destined to be together are connected by an invisible red thread. If that is so, the fates of Chai and Josi are weaved together and tied with a knot that cannot be broken.

Chai has been the self-appointed protector of her best friend, Josi, since their toddler days. Their lives are as far from extravagant as can be imagined - but they don’t need material things to be content. Their carefree childhood comes to a screeching halt when they are snatched together and sold as house help, and possible future brides, to a family far away.

This novel chronicles the girls’ struggle to adjust to their harsh new realities once the comforts and security of their old lives are stripped away. While Josi and others around them in the same situation have reluctantly accepted their new roles, Chai’s warrior spirit cannot be broken. She remains strong and refuses to give up hope of finding a way home.

Due to the infamous gender imbalance in China, thousands of females are trafficked every year to be sold as brides in remote villages and cities. Because of the lack of family resources, and the minimal efforts of the government to break up these criminal rings, many of the girls are never heard from again. Follow this story to find out what happens when despite one father’s lack of allies or money, he refuses to allow anyone to disrupt his quest to find his daughter.

What listeners say about A Thread Unbroken

This was a very good read. The narrator did a good job and gave the novel an easy pace which could be traversed by all ages. There is one grisly scene however which I don't recommend for children. It is very well written and gave no room for a vulgar or graphic
mindset, nevertheless the scene itself would need to be screened by a parent who knows what their child can handle. It wasn't until near the end that I realized that this book was set in a totally different culture. The problems encountered would be difficult in any setting but knowing the generational lifestyles and cultural expectations really put a different light on what the characters were going through. Also I am a Christian and I don't believe in a one size fits all religion so I lean away from the validity of Witch Doctors no matter how benign.

I enjoyed this audio book, A Thread Unbroken, written by Kay Bratt. The only issue I have with this audio book is the narrator is so slow, which made it hard to listen to for me when I first started to listen to this story. However, I love the feature of my Kindle Fire tablet that allows me to adjust the rate of speed of narration so I was able to set it to the speed 1.25x - an easy fix that made listening to this audio book much better.

A wonderful refreshing story full of colors in different tones and beautifully narrated. Kay Bratt, we all have to admit it, is an amazing writer. Thank you!

a wonderful book about the strength of two young girls, in a different place, trying to get home again. the father of one of the girls never gave up his vow to find them.

This book takes place in China with two best friends in their pre-adolescence. When the two girls ask permission from dad to go swimming, they are met on their way home to their village by a woman who convinced them to follow her. Unsuspecting, they are kidnapped, which leads to a year of torment and isolation. The lengths their family goes through to find them is the story that unfolds. Very good!

It was such an interesting read/audible I was able to listen on my way to and from work ,it was an eye opener considering how China's crippling decision to only allow 1 child so with all males to carry on the name but NO females ! To produce those children !! So sad

‘A Thread Unbroken’ reveals a very important narrative. Human trafficking in China. Whether it is now or the past, it remains a problem that unfortunately still exists in China and many other countries today. The author, Kay Bratt, wrote ‘Tales of the Scavenger's Daughters’ of which, I say is brilliant. Ms. Bratt also advocates for children as well. Which brings me to my next comment regarding ‘The Thread Unbroken’. It was so cliched. Along with a flatness I didn’t understand, and too simple that I honestly felt as if it was written by a middle schooler for a writing project. It’s just not written well. Many times I imagined myself reading this to my children when they were 8 years old at bedtime. The subject of ‘human trafficking’ and kidnapping of girls in China, then sold to be brides isn’t spoken about enough. Or abandoning children because of a birth defect, or the baby is a girl, instead of a boy. Those are facts and Kay Bratt has written several books about these issues. I expected a book that was written by an author who knows the unfortunate facts very well, what I read was a book trying to explore ‘human trafficking’ with scenes quite unimaginable. Families in villages with primitive living conditions, yet they have cell phones? Mixing modern day technology with old customs is one thing, this was too far fetched that I didn’t have a clue after reading quite a bit, that it was meant to be in this century. Those were a few more of the instances that were too big of a stretch to be believed. Along with a “floating island”refereed to as a “city” yet the boats on the island were on water? I tried very hard, but in my imagination, I no longer could see what was being described. There are many more instances.. I wanted to read and finish this book, based not only upon the summary which says: “Chai and Josi share a bond that transcends ordinary friendship. Chai has always been Josi’s protector—ever since they were toddlers, growing up together in a small Chinese village—she finds herself helpless when they are both abducted from their families and sold to faraway strangers.” As the reader/listener Chai and Josi were put in the story as if it was the early 1900s or even earlier. Ms. Bratt interjects casual mention of cell phones, computers, and other present-day items—which did not add to the story, but completely took away from it. As far as the narrator, Nancy Wu—is there a reason WHY you gave older Chinese men & women, Chinese accents? When it came to Chai & Rosi..they were depicted with normal, American accents—they were 13 years old?! There was NO emotion—FLAT & it LITERALLY put me to sleep for 3 nights because, again—children’s stories have that effect. “Nancy Wu I definitely would have given a higher rating if you had given this book any sort of urgency where needed and a serious inflection in your voice..very sad.” In ending—this was a book I really wanted to learn from, the horrors of what both went through. Yes, I read a beautiful story of Chai & Josi, who hung on to each other through every step—but I never heard them express any sort of REAL emotion nor REAL anger for what they went through and it completely upset me—it did not show me the reality of what REAL ‘human trafficking’ is REALLY like.

Really good book, amazing how these girls survived and helped so many people & children along the way.

great book. I loved the simplicity but care given to this topic.kay bratt knows what she speaks of.