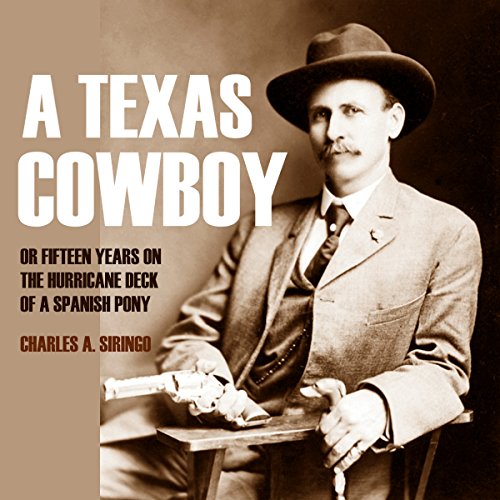 By: Charles A. Siringo
Narrated by: Brian V. Hunt

When legendary Charlie Siringo wrote this classic work, he was only 30 years old and had already spent half that life as a cowboy. With enduring wit, he tells the tale of long cattle drives, small-town beauties, meetings with Billy the Kid, and growing up on the Texas frontier.

In plain language you'll hear what it was like to live on the "hurricane deck of a Spanish pony" for months on end, earning enough to head into town and have a good time. Crisscrossing the Lone Star State, he lived a vanishing way of life. After only a few years of setting down, he was back in the saddle as a Pinkerton detective, a career he tells of in later books.

What listeners say about A Texas Cowboy

I read this because I like Don Edwards (a cowboy singer) who has a song about this author.
This was a pleasant story about a boy becoming a cowboy with a little sidestory about the capture and killing of Billy the Kid. The tone is very nice, both self-deprecating and self-promoting, with a lot of humor and a bit of history.

This is not great literature but it was a very pleasant few hours.

The narration was just about perfect, wonderful voice, and a good. clear, reading with appropriate emotion.

Words fail me so once again I will use the same ones...Gem, Treasure, Treat, Priceless.