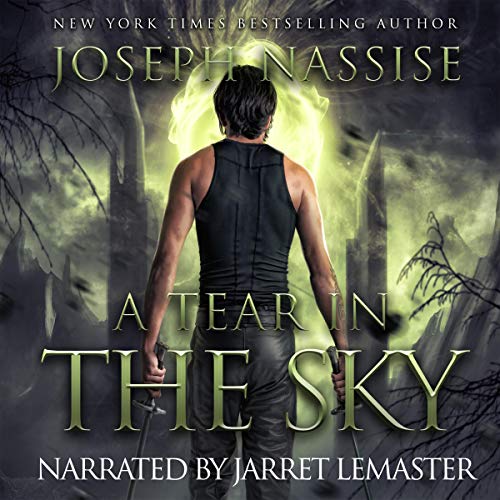 A Tear in the Sky

He said he'd go to hell and back to save her. Now he'll get his chance!

Knight commander Cade Williams is having a bad day. A message from a once-powerful enemy reveals the unthinkable. Cade's wife, Gabrielle, is not dead as he has long believed but held captive deep in the Beyond, a prisoner of the Adversary. Cade vows that nothing will stop him from freeing her soul from the prison that binds her.

Standing in his way, however, is an army of Chiang Shih - Chinese vampires with a taste for human flesh and a desire to invade our world, backed by what looks like half the specters this side of hell.

Never mind the Adversary himself.

What listeners say about A Tear in the Sky

cade, head of strike team echo, a knight Templar force dedicated to protecting mankind from demonic invasion. He's met the Adversary before and lost. Now he is being called into the Beyond to face nemesis and perhaps see end to his story. good fast listen.

Absolutely loved this audiobook! The characters and settings come to life. The writer and narrator never miss a beat and it is an edge of your seat adventure. Start from book one. You will not be disappointed!

Another great book in the Templar's series with a thrilling story, lore and characters! Great narrator as well!

After receiving a package from an old friend a military commander with the catholic Church steps into a nightmare trying to prevent an invasion of monsters from another dimension. Their first mission goes FUBA and they have to fight to go back after their captured team mate.
This book wasn’t my cup of tea, but I think that people who are more into military action stories would probably like it. The Narrator was okay, but not super good. His voice monotone and he wasn’t very good at changing his voice to bring the story to life. He also wasn’t the worst narrator, just not one of the best either.

Can you go to hell and back?

Cade and Riley literally take the fight to hell in their quest to rescue Duncan and defeat his captors. This episode in the Templar Chronicles is not only action packed, it is filled with a variety of plot twists that keep the reader/listener on their toes. Jarret Lemaster’s narration and variety fo voices for the characters make for an excellent listening experience.

A Tear in the Sky (The Templar Chronicles #3), I very much enjoyed my third read from author Joseph Nassise. I'd read The Heretic back in February of 2017 and recently was given an Audible copy of A Tear in the Sky (book 3), since it was so long since I'd read The Heretic it was worth re-reading so I bought the audio box set. Well-written, fast-paced and entertaining. I was given an Audible copy of this book & am voluntarily reviewing it. I was impressed and enjoyed the vocal variety & inflections of narrator Jarret Lemaster. I look forward to reading more in this series & from this author. (RIP Marley January 20, 2014 - July 24, 2018).

I loved this audio book. Awesome characters and brilliant storyline.
I highly recommend this book.
The narrator is good too.
❤️😻😂