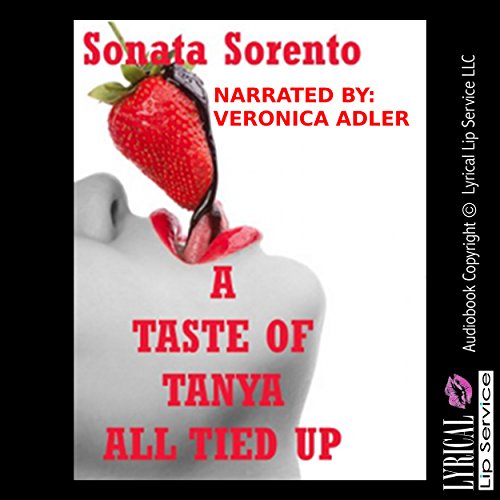 A Taste of Tanya All Tied Up

Tanya is really enjoying the college party, and she's surprised when Amy, the beautiful girl from her calculus glass recognizes her. She's also surprised at the desires the girl awakens in her. Before long, conversation turns to dancing, and it doesn't take long before dancing turns to finding somewhere private. From there, it's no time at all before she's right in the middle of a scorching first lesbian experience, and Amy's not content to leave Tanya's courage to chance. That's why she makes sure there's bondage involved!

Warning: This audiobook contains very explicit descriptions of sexual activity during a first bondage sex experience. It includes first lesbian sex, bondage, lesbian seduction, domination, and submission. It is intended for mature listeners who will not be offended by graphic depictions of sex acts between consenting adults.

The song was a fast one, and she wasted no time in pressing her back to Tanya's front and grinding against her to the beat. Tanya was shocked for a second, but then she put her hands on Amy's hips and moved her own, loosening up as the music thumped through her.

Before she could get a real rhythm, Amy was turning around, pressing her crotch to Tanya's and rolling her hips. Her arms went around Tanya's neck and her lips pressed against Tanya's skin there.

What listeners say about A Taste of Tanya All Tied Up