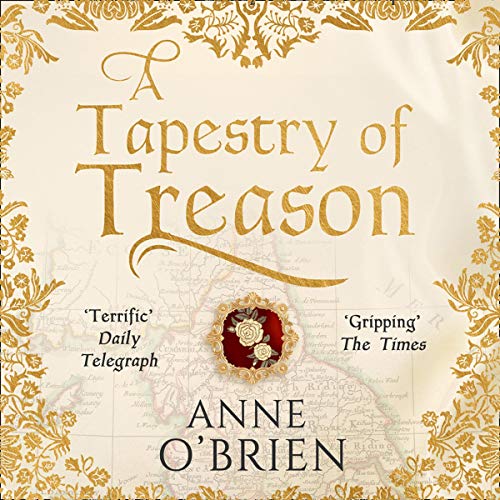 A Tapestry of Treason

Her actions could make history - but at what price?

1399: Constance of York, Lady Despenser, proves herself more than a mere observer in the devious intrigues of her magnificently dysfunctional family, the House of York.

Surrounded by power-hungry men, including her aggressively self-centred husband, Thomas, and ruthless siblings, Edward and Richard, Constance places herself at the heart of two treasonous plots against King Henry IV. Will it be possible for this Plantagenet family to safeguard its own political power by restoring either King Richard II to the throne, or the precarious Mortimer claimant?

Although the execution of these conspiracies will place them all in jeopardy, Constance is not deterred, even when the cost of her ambition threatens to overwhelm her. Even when it endangers her newfound happiness.

With treason, tragedy, heartbreak and betrayal, this is the story of a woman ahead of her time, fighting for herself and what she believes to be right in a world of men.

Giving voice to the forgotten women of history, this is the next brilliant historical novel from Sunday Times best- selling author Anne O’Brien.

What listeners say about A Tapestry of Treason

Very enjoyable book to listen to. I had just finished Queen of the North and this was an excellent take on Constance of York and her life situation.

One of the best books I have ever heard!

Being a woman who loves history this book kept me spellbound throughout from beginning to end. In fact I was dreading that it was going to end. The main character was well developed and fascinating. The narrator is perhaps the best I have ever heard. I listen to books all day every day as I work so I go through a lot of books, this is one of the best.

What a great story told in the first person by an excellent narrator! I knew nothing about Constance of York, yet I was thoroughly engaged and kept on the edge of my seat. I enjoyed learning about someone I never knew existed and gained insight on the perspective of a female in this historic time period within this famous family narrative.

I thoroughly enjoyed this novel. It was clearly read by Gloria Sanders and Anne O'Brien portrayed Constance of York very well during the early period of the Wars of the Roses. I feel that she would have served well in WW2 in the SOE. She was an independent woman, well before her time, living on her wits in a court full of treachery and ambition. Married at first to Thomas Despenser she was a dutiful and shrewd, if not loving wife. She gave him 3 children. She was daughter of Edmund of Langley, Duke of York, Edward III's 4th son; cousin to King Richard II; sister to the future King Edward IV, who became the Duke of York after his father Edmund of Langley died in this book. Her younger brother (Dickon) Richard, was Earl of Cambridge and his grandsons Edward IV and Richard III both became Yorkist Kings of England, through his son Richard, Duke of York.

I love historical fiction but this just didn't do it for me. Very slow storyline. Main character not very likeable so I didn't feel a need to want to finish. Got two thirds finished before moving on. Narrator okay but voices merged into one another, not different enough

when I started this book I was unsure if I would finish it. The characters didn't draw me to them, indeed I felt a dislike for Constance, the main character. She was a selfish woman, who never saw herself at fault, even though she committed treason. Against my better reason I carried on and am now happy to say I am glad I finished the book.
I enjoyed the story, I didn't know much of the Yorks during this time in history except for their treasonous actions and although this book is factual, it is based on historical fact. So take it as it is, a factual book of the life of Constance, who lived, as cousin to the king, overlook her selfishness and you too may enjoy the story.