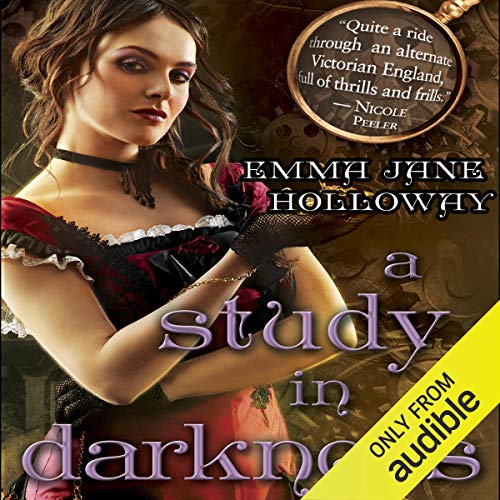 A Study in Darkness

When a bomb goes off at 221B Baker Street, Evelina Cooper is thrown into her uncle Sherlock's world of mystery and murder. But just when she thought it was safe to return to the ballroom, old, new, and even dead enemies are clamoring for a place on her dance card. Before Evelina's even unpacked her gowns for a country house party, an indiscretion puts her in the power of the ruthless Gold King, who recruits her as his spy. He knows her disreputable past and exiles her to the rank alleyways of Whitechapel with orders to unmask his foe. As danger mounts, Evelina struggles between hiding her illegal magic and succumbing to the darker aspects of her power. One path keeps her secure; the other keeps her alive. For rebellion is brewing, a sorcerer wants her soul, and no one can protect her in the hunting grounds of Jack the Ripper.

What listeners say about A Study in Darkness

An absolutely wonderful read.
Questions from the previous book answered and more remain to keep you going.
loved it.

I enjoyed this book very much, enough to get the next in the series. The narrator was excellent I will be looking for more books she has done. At first so many characters where introduced I felt overwhelmed but everything smooths out and a good mystery takes over.

One of the very best ever!!

This is book two of the series and so as I am rereading the set I am compelled to write my feelings. a great part of the story is that you get so involved with these characters that you will FEEL for them.
I cheered and cried through out. I even cursed out loud a couple times.
The book is long but not boring. The world portrayed is unique and sometimes even scary The narrator is excellent with all the voices both men and women.
Well worth any price!!
This is a classic.

In the first book we have a strong female protagonist who rises to the challenge of her circumstance. In this one, Evelina just crumples. I'm especially disappointed with the romance, because it seems out of character for her.

the book is a good story. but the reader for me is what is really selling this series. she does a wonderful job of bringing the characters to life.

What was one of the most memorable moments of A Study in Darkness?

I really enjoy the moments when Evalina interacts with Sherlock Holmes. I do think Sherlock is dumbed down a bit for this series, but he certainly has more heart than his traditional portrayal.

Have you listened to any of Angele Masters’s other performances before? How does this one compare?

Yes, she is excellent in this series. Does a good job with both women's and men's voices.

This series is an interesting combination of steampunk, magic, mystery and romance. The author does a very good job at balancing the three. I did find myself annoyed with the protagonist occasionally, but I think that indicates that the author did a good job of drawing me into the story. I am waiting anxiously for my credits so I can purchase the other books in the series. I also like that it's a good long listen and yet I've not lost interest in the story, and I can easily differentiate between the characters.

I love the steampunk/victorian settings of this series for a nice change of pace in my fantasy reading. The book has it all murders,mystery,magic, clockwork devices, evil villains, romance and of course proper manners. I loved Sherlock Holmes appearances as Evalinas uncle and the interesting take on Jack The Ripper! The story has a great cast of characters which are easy to invest care for. The narrator was good except for one annoying voice for the blue king which was thankfully short. I eagerly await the next book A study In Ashes.

Just not as impressive as the first book.....

I loved the first book, the universe Holloway has created is a brilliant interpretation of the steampunk genre & the Sherlock Holmes stories.
In this book, in contrast to the previous one, everyone seemed to spend their time with their heads up their ass whining about one thing or other rather than just sucking it up & doing something. The heroine has gone from kick-ass & competent to whiney, needy & hoplessly infatuated to the exclusion of all reason. I only finished this book so I knew for a fact that the plot was going the way I had guessed it was going in the last book. The third book is still sat in my Audible library waiting for me to have the patience to listen to it....

A great story, full of characters. Can't wait for part 3!

An intriguing second instalment in this series. With appearances by Sherlock Holmes and his trusty sidekick, the ultimate cast of whores, guttersnipes and malingerers, the return of evil sorcerer Magnus, as well as the "truth" behind the identity of Jack the Ripper (it's certainly not someone that's been guessed before!!) this book is crammed with characters to bring alive the story. It's utterly engrossing, and certainly keeps you hooked - I couldn't stop from page 1 to the very end, and the audiobook has been listened to many times over! With only the thrilling conclusion to the trilogy to go, I'm definitely going to miss this world when I'm finished - and am not sure how they're going to fit everything in! But in the meantime, I highly recommend both this book and the whole series to all readers, especially magic and steampunk lovers.