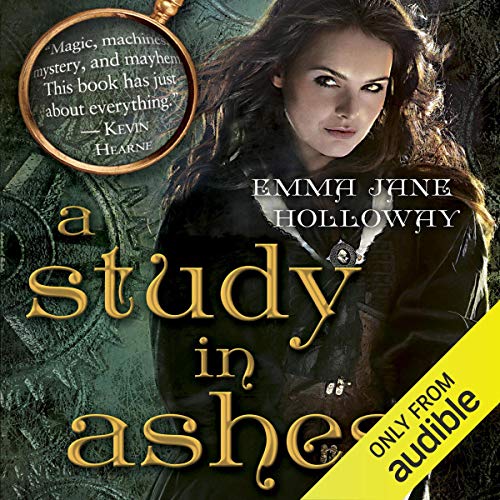 A Study in Ashes

As part of her devil’s bargain with the industrial steam barons, Evelina Cooper is finally enrolled in the Ladies’ College of London. However, she’s attending as the Gold King’s pet magician, handcuffed and forbidden contact with even her closest relation, the detective Sherlock Holmes.

But Evelina’s problems are only part of a larger war. The Baskerville affair is finally coming to light, and the rebels are making their move to wrest power from the barons and restore it to Queen Victoria. Missing heirs and nightmare hounds are the order of the day—or at least that’s what Dr. Watson is telling the press.

But their plans are doomed unless Evelina escapes to unite her magic with the rebels’ machines—and even then her powers aren’t what they used to be. A sorcerer has awakened a dark hunger in Evelina’s soul, and only he can keep her from endangering them all. The only problem is . . . he’s dead.

What listeners say about A Study in Ashes

so many threads coming together

It was superb, all the different stories running through each other, and it keeps you guessing.
I am sad that it is finished, I just couldn't stop listening I was so entranced.

I was at the book store when I saw this book and Kevin Hearne's name on the cover jumped out at me. He's one of my favorite authors so I decided to read the first in the series since he gave the book/author his approval. I was not disappointed, it is a great series!! This installment does not let down! Angele Masters does a good job, you can hear the differences in her characters and she conveys emotion well. My only complaint is that she's a little slow. Not so slow that I want to chew my arm off and beat myself to death with it, but much slower than I am used to. Overall, great listen/read!

I loved the series and the stories, sad how some of the characters stories ended, but that is also the mark of a good story.

I liked the book and Angele Masters performance. There were so many sub plots that it was a bit unsettling.

A study in ashes by Emma James Holloway

This is the third book in the series. it is a continuation of the a young woman and her life in which Magic
is is free in the world again as she battles the dark and evil forces of a corrupt kingdom and how she becomes a woman of strength and power.
She is the niece of Sherlock Homles who features from time to time in the story line.
Beautifully written I enjoyed the characters and the adventures .
Read by Angele Master who does q fine job of narration.

I was skeptical because of some of the reviews but I loved these books. They had a happy ending and that's a biggie for me, but I'm left wondering if there will be more books. In the end something happens to one of the main characters and I want to know what! The author leaves it with a hint there might be more so I'll watch for her books. If you enjoy steam punk you'll love Gail Carriger Finishing School series I did.

Wonderfully written and a joy to read, listen. Characters come alive, warts an all.
Strong female heroines, overcoming and enduring.

Emma Jane Holloway has a marvelous talent for bringing the genre to life! This trilogy has wonderful details without getting too bogged down. I thoroughly enjoyed each story and look forward to reading more from her! Angele Masters did a wonderful job bringing the stories to life. A winning combination! STANDING APPLAUSE!!!

This book is a wonderful end to a masterful trilogy which leaves open the possibility of additional stories within a fully-imagined universe. The author combines a steampunk imagining of London in the time of Sherlock Holmes with a fantasy element that fits in with the "anything is possible" ethos of the steampunk culture. With this story, the trilogy comes to a satisfying end with lingering possibilities of additional adventures, but they are not required to find the series a satisfying tale quite well told.

A fine conclusion that just begs for more!

I have been absorbed by Ms Holloway's world and characters for just under 69 hours, and I am bereft, starting another book after an epic like this is always a problem for me - I usually return to an old favourite so I can shake off the loss in comfort!

This trilogy of books have been criticised by some for being slow, and to be sure the author doesn't rush through her complex and many stranded plot, and this isn't a wham-bam-whizz-pop breathless OMG sort of book - the author must have had her whole plot line drawn out before she started, I can't see how she kept a track of things otherwise. Little things in book one become important in book three, and everything matters - there are no red herrings here to mislead or trick the reader. Whilst this is essentially Evalina's story, there's a large cast of supporting characters who all get their own chapters and storylines. A lot happens in this, the last of the trilogy. It starts with the aftermath of a death, and the consequences of bargains made in book two, rolls along quite briskly I thought, to the extent that the final denouement is all over rather quickly! If I'd been reading a physical book, I'd have gone back and reread that chapter, but I was on a roll by that point with the end in sight so I ploughed on!

The various strands are brought together to a, for some, satisfactory conclusion, but for others... Let me just say there's another book or three needed here.

Consistently well read, with the many principle characters individually drawn, this is a good trilogy, just be prepared to go along at the author's pace - it's well worth it.