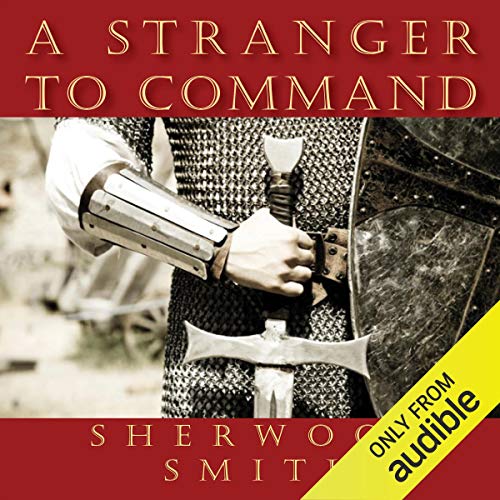 A Stranger to Command

In this prequel to Crown Duel, teenage Shevraeth is invited by a king his own age to train in command at the cavalry academy in Marloven Hess, known for its violent history. Shevraeth is reluctant to leave his own comfortable and civilized Remalna for this warrior kingdom, except that Remalna is slowly becoming less civilized and more violent under a bad government. In Marloven Hess' elite academy, Shevraeth finds every assumption overturned, including his own identity. He discovers action, laughter, terror, enemies, friendship - and even romance - as world events move inexorably toward conflagration.

What listeners say about A Stranger to Command

An amazing book, and a great read!

I absolutely adored it, the way he does the voices just makes it so much more interesting! I could listen to it on loop.

The making of a leader - not to be missed!

This book is, by far, my favorite of those I've listened to by this author. The fantastic narration is a big factor. Fred Berman has a voice that can seamlessly move between young and old voices, as well as male and female. I liked how the bulk of the narration was done with an American accent and then when Vidranic was speaking or the letters between him and his family were referenced it was with a different accent.

Anyway, this is a character driven story of a young man, thrust into the foreign world of a military school in a foreign country. He has a shaky start but through determination, intelligence, kindness and wits, he excels and spends the next four years learning and growing into a man and a warrior.

The 'big bad' in this story is mostly a looming shadow, providing impetus for much of the training at the military school, but doesn't really play a role action. The focus is on Vidranric's education and his growth as a person and a leader. I really enjoyed it.

I can not express how wonderful this story is and frankly every book Sherwood smith has(that I have read)written!!!!! If I could give it 10 stars I would!!! ❤️ I don’t like sex written into books that’s not real story tailing, and so many new stories copy each other😝 but the real character building and laughing and crying. This book makes you want to be better and isn’t that a novel thought 😉

loved the performance! the accents and flair were perfect. the story is hard to follow when listening, but he did a great job.

A Very Strong Effort by Berman and Smith

What made the experience of listening to A Stranger to Command the most enjoyable?

This is a well-done prequel. In essence by reading Crown Duel first, this book felt like a long secret handshake between the author and reader. This may be Fred Berman's strongest book. I love it to piecese and listen to it again and again.

My favorite character is Shevraeth, the main character, but his best friend Savona is also great and is one of the best characters I've ever read. I love Savona!

What does Fred Berman bring to the story that you wouldn’t experience if you just read the book?

Fred does an excellent British accent in this book (although I am American so I am not sure if this would hold up for British readers but I think so), and also lends a lot of emotion to the climax.

This is one of my favorite books of all time now! The Crown Duel series is one of Sherwood Smith's strongest.

Wished there was more. A brilliant story. There are moments where you must struggle to comprehend certain aspects of the story if you do not know previous works but overall I thoroughly enjoyed the narration and the tale.

An impossible truth: Even better than Crown Duel

What did you love best about A Stranger to Command?

A Stranger to Command is a triumph of prose and performance! Sherwood Smith's dynamic characters and elegant writing style converge with Fred Berman's skillful narration to create a "page-turning" audiobook that surpasses its sequel, Crown Duel.

Which character – as performed by Fred Berman – was your favorite?

Fred Berman's Vidanric is an utter delight! The British accent is an excellent choice to mark Vidanric as a foreigner in the text.

Absolutely! I had to tear myself away, and I couldn't wait to return to this text.

Read it. You'll love it.