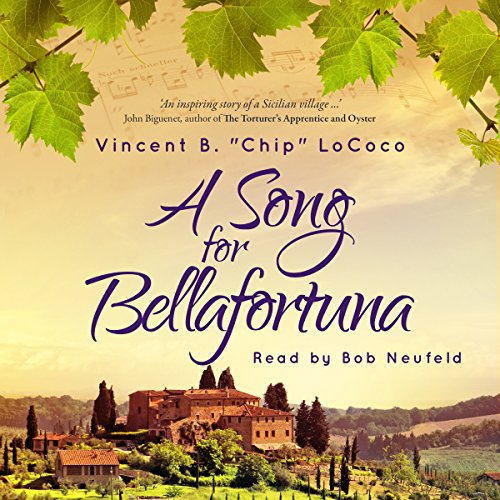 A Song for Bellafortuna is a spellbinding, historical fiction novel of a young man's desire to free his Sicilian village from the domination of one family's long reign. For years, the beautiful, yet secluded, hilltop village of Bellafortuna, Sicily, was a great producer of wine and olive oil. The entire village prospered. However, after the arrival of the Vasaio family, production dwindles and the villagers soon find themselves in crushing debt to the Vasaios. Only one family in the village remains outside the control of the Vasaios, but the reason haunts Antonio Sanguinetti every day of his life. Antonio is determined to erase this legacy by offering financial and emotional support to his fellow villagers. He introduces them to the choral song from Verdi's opera, Nabucco, which becomes the rallying cry for the villagers and offers them hope for a better life. When Antonio's only son, Giuseppe, discovers his family's past, he becomes determined to take on the Vasaios and remove them from power. Led by the young Giuseppe, a plan is hatched that could result in either complete freedom for the villagers, or if it fails, forever solidifying the Vasaios' control. Find out what happens in A Song for Bellafortuna, a sweeping epic tale of love, drama, sacrifice, and redemption, set among the beautiful landscape of Sicily. The novel has been called lyrical, intelligent, majestic, magical, powerful and compelling. Award winning and best-selling author, Vincent B. "Chip" LoCoco, lives in New Orleans. His first novel, Tempesta's Dream - A Story of Love, Friendship and Opera, became an Amazon best-selling novel and was awarded the 2014 Pinnacle Achievement Award in Historical Fiction. Amazon also has named his book as a Top Rated Novel in Italian Historical Fiction. His most recent novel, A Song for Bellafortuna, was shortlisted in the William Faulkner - William Wisdom Writing Competition

What listeners say about A Song for Bellafortuna

Perfect narrator for this story.

A pleasant and soothing story with the overall feeling that all will be right with the world. Lots of texture and transporting details.

What a beautiful well written story for all audiences. I highly recommend and look forward to more books written by the author.

Where Passion Lives - A Story of Sicily

What made the experience of listening to A Song for Bellafortuna the most enjoyable?

The Narrator and the story. It's such a unique story. And Bob Neufeld does such a marvelous job bringing you into the action.

What was one of the most memorable moments of A Song for Bellafortuna?

The meeting between young Giuseppe and Vittelio, the man who controls the village. It was very exciting and really propelled the action from that point forward.

Which character – as performed by Bob Neufeld – was your favorite?

Enrico Caruso - He made the famous tenor come to life. Just wish he could have sung like him.

If you could rename A Song for Bellafortuna, what would you call it?

Bellafortuna: The Story of a Heroic Passion for Decency

Italian culture at its finest!

Thank you for a beautiful story of love, courage, redemption, family, and tradition in a historical fiction genre. As a granddaughter of four Sicilians, I cherished the examples of the importance of hard work, faith, food, family, and music of Italians. Every reader and Italian tourist will learn more about Italy’s culture and the age-old truth that we all are better when we help one another!

A small Italian village fights for its rights

I enjoyed the story about these families who fight for their freedom in their small village. The principle character was heartwarming and memorable.

- offering nothing that is stimulating or challenging -
No meaningful internal dialog. Overloaded emotional cliches. Overstated and underdeveloped conflict.

Lyrical prose, but as slow as a sleepy Italian village

That's a tricky one. I enjoyed listening to the book as the prose had a lyrical 'sing song' quality to it, and the narrator handled the Italian words and phrases well. However there is very little plot and it is incredibly slow paced. I found myself listening to the tone and voice of the narration but not the actual words.

I most enjoyed the descriptions of village life in the past and hearing about rivalries and how family connections were of supreme importance. It gave me a very accurate visual impression of the place where the story was set. I least enjoyed the story itself as there wasn't much happening. The whole story can be summarised as 'boy hears about family history and tries to put things right by making a seemingly impossible bargain'.

The narrator had a very flat tone initially and paused in odd places, but he handled the foreign language sections well and the whole story was clearly enunciated. I think he was the right person for the story.

A sleepy-paced story of a boy trying to put right the wrongs done by his grandfather. There is very little else to the story, but some lovely prose descriptions of village life in Italy make this an enjoyable listen. Please note that not all foreign language words / phrases are translated into English. I would describe this book as a sweet natured story.