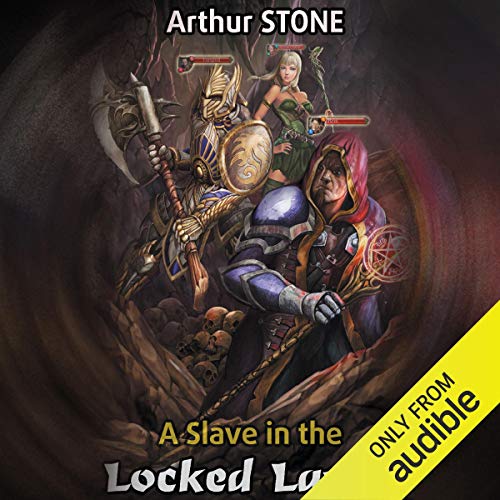 A Slave in the Locked Lands

A Slave in the Locked Lands

The history of our world tends to move along a shallow spiral - when completing a turn, you end up mighty close to where you started. The history of Second World, in contrast, seems to have simplified its path to a ring from which there is no apparent way out.

An unforeseen invasion lays waste to whole provinces, prompting the game's most powerful clans to ally with the emperor's guard to stop the monstrous hordes in their tracks. A war erupts that nobody saw coming, shattering the tedium of peaceful life.

All the while the world's most elusive character - once a lowly miner, now a powerful mage - finds himself in an impossible situation, and sorely in need of allies of his own as he searches for a way out.

the narrator was truly god awful. every breath he takes he slurps inward making the most u forgettable sound I've ever heard. a narrative disaster, I struggled with every sentence. the only reason I was able to finish is because I started and finished the book while working, Im a heavy machine operator and didn't have the time to dally looking for a new book to download. not to mention the fact audible had this as book one in the "series" list. it's not. it's book two. so begining was hard to start with, although I was able to get behind the story teller after the first few chapters, I still can not and will not put myself through another audibly torturing narrative.

A very fun read but the narrator really needs to calm down, he over emphasizes badly. makes it annoying to listen

So much huge rewards from everything. And he's first everywhere.
Reader is really good.
Story is also nice all the way.
A little bit long until he gets a normal party, basically in the second book.
Overall super!

Not as many noobs in this book.

I loved how far down the rabbit hole the MC gets and that he finally has a party of his own. I thought it was very interesting that his captors turned out to be decent folk, kind of hilarious actually. I felt more suspense and adventure in this book than the first but I also felt like more mysteries we're being created.

Other than a couple things that need explaining, I can find no reason not to love this book.

Ross is an unrealistic and poorly one dimensional character. The plots and plans of this book are only half thought out, left thin and roughly fleshed out.

Adding two teammates thru most of this story helped add to an monotonous and repetitive onslaught of empty creature battles... No excitement or twist, just like mining for ore.

Some interesting new developments make this book seem a little more bizarre than I first thought it would be. I am interested to see where this is going.

Better than the first!

I enjoyed this book immensely, this book was better than the first and had some very original concepts. looking forward to listening to the third which i am buying now.

if you read the first one you'll love the second

More of the same, good but just not yet a real story. These books are more like a single book drawn out to a trilogy. So much filler.

I cant believe it ended here

first #TeamRoss . Oh I can't believe the book ended where it did.... oh the suspense of it all. waiting for my monthly credit allocation to finish this series.

So good by halfway though I purchased the third. Am a fan of role playing and strategy games it's well thought out.