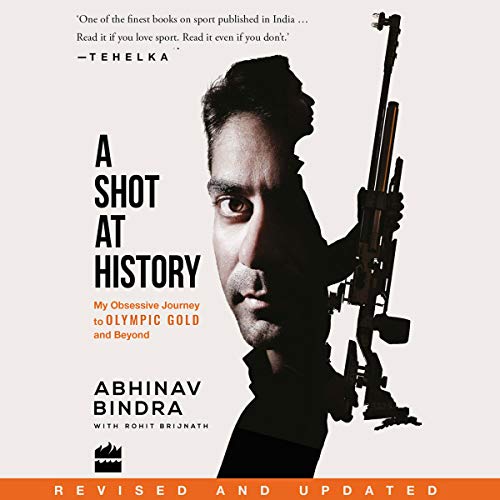 A Shot at History

Abhinav Bindra once shot 100 out of 100 in practice six times in a row and walked out of the range unhappy. He is a perfectionist who once soled his shoes with rubber from Ferrari tyres because he thought it would help. He would wake up at 3:00 a.m. to practise at his range at home if an idea suddenly struck him. It is from such obsession that greatness arrives.

Abhinav Bindra's journey to become the first Indian to win an individual Olympic gold, and the first Indian to win a World Championship gold, is a story of single-minded passion. The Olympics has been an all-consuming journey for him ever since he was shattering beer bottles and glass ampoules in his garden in Chandigarh. No obstacle was too hard to overcome, no amount of practice too much, no experiment too futile and no defeat so severe that it made a comeback impossible.

Shattered by his failure at the 2004 Athens Olympics, when a gold medal seemed imminent, he changed as a shooter: from a boy who loved shooting, he became an athlete bent on redemption, a scientist who would try anything - from mapping his own brain to drinking yak milk to climbing rock walls - to win at the Beijing Olympics in 2008. His victory was not just a personal triumph; it was a gift to his nation, a breaking down of a sporting barrier that had stood for a century.

Bindra's feat has taught his peers, and those yet to come, that an Olympic gold isn't an impossible dream. In ranges, on fields, in arenas, Indian athletes now own a new belief; they wear the knowledge that no challenge is beyond them. Helping to tell this remarkable story is sportswriter Rohit Brijnath, who collaborated with Bindra in producing this compelling autobiography of one of India's greatest sportsmen.

What listeners say about A Shot at History

I have found this book to be realistic yet practical. Authors honesty and dedication towards the sport made this book a must-read for all competitive shooters, this book will motivate you & keep you on track