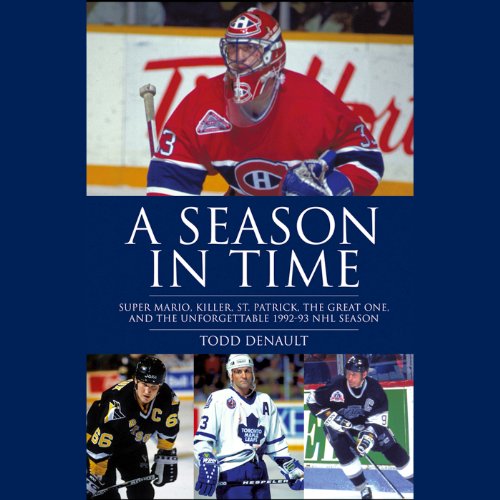 A Season in Time

Twenty years after the fact, the mere mention of the 1992-93 NHL season brings back vivid memories for hockey fans across North America. The last time that the Montreal Canadiens hoisted the Stanley Cup, Wayne Gretzky's last appearance in a playoff final, and Mario Lemieux's most inspirational season, these years are rightly considered some of the greatest in NHL history. Now, in A Season in Time: Super Mario, Killer, St. Patrick, the Great One, and the Unforgettable 1992-93 NHL Season, acclaimed hockey writer Todd Denault looks back to those heady days.

The story of a truly magical age for hockey in North America, a time that came to be known as "the last great season", where hope reigned, where the unthinkable seemed possible, and some of the greatest legends the game has ever seen took to the ice, A Season in Time is a true trip down memory lane. Covering the stories of Mario Lemieux, Wayne Gretzky, Patrick Roy, and Doug Gilmour, and capturing the frenzy and excitement that hasn't been seen since, the book is essential listening for hockey lovers of all ages.

Insightful and informative, A Season in Time is a loving look back at a season for the ages.

What listeners say about A Season in Time

I thought this book was great. Such a fun listen about an excellent time for the sport I love. Listening about Gretzky, Doug Gilmour, Grant Fuhr, Mario and all the other players I grew up watching and loving was incredible. That said, the narrator had a great storytelling voice but I'm not sure he was able to pronounce one name correctly, which is really annoying.

Overall story was interesting but as a hockey fan and an audio book fan I am sooooo tired of narrators not being able to pronounce names. I don't necessarily blame the narrator because his read was good but whoever the producer of this and every other hockey book I've listened to needs to call a hockey historian and get a phonetic list of names. I cringe every time I hear a badly pronounced name. Please, please I implore you to take the extra time to make this situation better.

good read but Narrator mispronunciations were distracting. I wish he would if familiarized himself better

Great material, not so great narration

Audio book gets a four...the material is great, but the narrator mispronounced so many names. The one that grated me the most was "Roy". When talking about the legendary goalie, it's pronounced "Wah", not "Roy" like Roy Rogers. That was just the most glaring of name mispronunciations. Think I'll have to get the print or ebook to truly enjoy this one.

If you could sum up A Season in Time in three words, what would they be?

All of the players and coaches

Did Ken Maxon do a good job differentiating all the characters? How?

Yes and no. The pronunciation of many player names was horrible. I'm a longtime hockey fan and am very familiar with all of the players and coaches covered in this book. Ken Maxon butchered many of the names to the point that it detracted from the presentation. I don't understand why the producers of audio books do not insist that their narrators learn how to properly pronounce names especially in sports books.

The narrator almost ruined this book for me. While a well written book about a memorable season, the poor narrator's constant mispronunciation of names speaks to a complete lack of hockey knowledge. Whoever oversaw the narration should have done so much more to help get the names right. Very disappointing.

Great Book with a POOR narration

The content and story of this book is great! Denault wrote a great book about a fun and unusual NHL season. But the performance by Jen Maxon is horrible. He mispronounces too many names to count and it is very distracting. He also misreads parts of the book and mispronounces some words. Probably the worst audio book I have listened to and it is such a same because the book is great.

This is a wonderful history of an important year in the life of the NHL. More importantly, it goes much deeper into the reasons for what happened that year, and what the longer term impacts of the year were. Mr. Dennault has done a masterful job of both cataloguing and explaining an important period in the history of the world's best sport. Strongly recommend this volume to anyone who is a hockey fan.

Apparently they make you give at least 1 star

About 70% of the names in the book were mispronounced. It's like they found someone who has never seen, heard of, or talked about hockey before, and told him to interpret the names however you see fit.Some of these names I can understand... Pronouncing "Roy" the way it's spelled in English? I guess that's understandable. "Pierre Page" as "Paige?" OK, if that's your only mistake, I can look the other way...

Other names were simply laughable. "Rick toeSHAY," "Sergei Savard," "TEA-mew suh-LAYNE,"... the list goes on and on. "Bure" does not rhyme with "sure." "Turgeon" doesn't rhyme with "sturgeon." You would hope that at some point, the producer would be able to help the narrator out.

If it were a couple of names here and there, I would completely understand, but i would venture to say that there were more mispronounced names than ones correctly pronounced.

Overall, the narrator completely distracted from the beautiful storyline.

Do you think A Season in Time needs a follow-up book? Why or why not?

Audible - please find a producer with SOME kind of hockey knowledge.Or, at the very least, someone who is willing to ask how different names are pronounced.

I loved the content of the book but I did not enjoy listening to it. I would only recommend it as a joke, as something to be mocked. The book itself is highly recommendable to any hockey fan.

What other book might you compare A Season in Time to and why?

If we are talking about the text only, I would recommend Todd Deanult's other works but they are not offered as audiobooks. I have listened to many audiobooks where mispronunciations are common but not as frequent as this book.

Quite simply, the reader and the producer (I blame the producer more than the reader) could have done their homework. Not a single thought was given towards researching and checking. This was a sloppy and careless work. Completely unprofessional.

It only served as a means of getting a book read when the time to sit and read was not available. Otherwise, it's flaws were quite distracting and robbed the pace and meaning from the text.

As I mentioned earlier, the producer of this book should take full responsibility for Ken Maxon's poor showing. I can't stress enough the shame these people have brought on this otherwise thrilling hockey book. They owe us all an apology (and a refund) and they owe a mea culpa to author Todd Deanult.