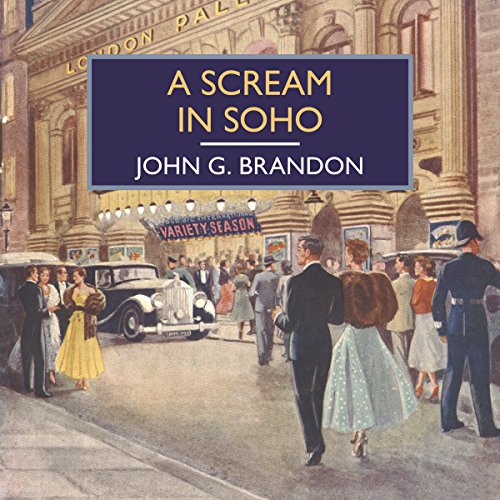 A Scream in Soho

Soho during the blackouts of the Second World War. When a piercing scream rends the air and a bloodied knife is found, Detective Inspector MacCarthy is soon on the scene.

He must move through the dark, seedy Soho underworld - peopled by Italian gangsters, cross-dressing German spies and glamorous Austrian aristocrats - as he attempts to unravel the connection between the mysterious Madame Rohner and the theft of secret antiaircraft defence plans.

What listeners say about A Scream in Soho

Excellent story but not a whodunnit

I really enjoyed this book, even though it was more of a thriller than a golden age mystery. Gordon Griffin is, as always, excellent. Recommended.

Good Story of the golden age.

Great story, a little to much of over thinking the clues, but otherwise a story with lots of twists and action. Read by one of the best on Audible

the story is told with a meticulous sense of detail, but that doesn't cause the pace to drag.
there is also a sense that the author had a sense of the somewhat ridiculous nature of the story and enjoyed telling it.


very enjoyable couldn't stop listening. I would recommend this audible title ; hope to listening to the next story very shortly

Any comparison to Bulldog Drummond is pretty thin

The setting and the people of Soho at the start of WW2 are great and a real treat for those who know and love London. The story is okay, not as exciting as Bulldog Drummond or the Saint by any stretch though. I think the real issue is that while the reader isn't bad, he's remarkably dull. My ears just tune him out so I had to keep going back and relistening to parts I missed. I noticed the same on others in this series of books he's read but thought it was the plots that weren't gripping those cases. This should have been a fun listen, but turned out to be rather tedious