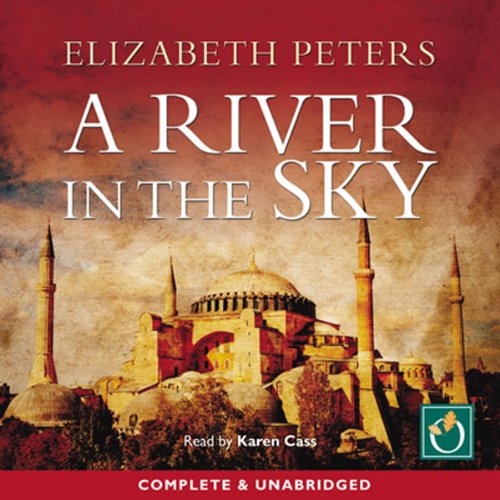 It's 1910, and archaeologist Amelia Peabody heads for Palenstine hoping to prevent an English adventurer called Morely from causing damage during his search for the vanished treasures of the Temple in Jerusalem.

In the meantime, her son Ramses is working on a dig at Samaria where he encounters a female German archaeologist, and a mysterious man of unknown nationality and unknown past.

Ramses' curiosity leads him to a startling discovery about the pair.

He must pass the information on to his parents in Jerusalem but can he get there alive?

"The most potent female force to hit Egypt since Cleopatra." ( Philadelphia Enquirer)

To longtime fans of the Amelia Peabody series a warning that this is not "the latest instalment" but is set in 1910, between "Guardian of The Horizon" and "The Falcon at the Portal". This is disconcerting, as if you are already familiar with the personal lives of the younger characters, Ramses and Nefret, David and Lia, in this book it is hard to forget what eventuates later on. The story is typical of the usual strange mystery, this time set in Palestine, and with the usual wonderful by-play between Amelia and Emerson. It is shorter than usual, but a welcome return and another pleasant interlude with our much loved characters. For new readers of the Amelia Peabody books it would be better to start at the beginning of the series with "Crocodile on the Sandbank" and work through in order.

Having become used to the superb narration of Barbara Rosenblat who portrays all of the characters in these books so perfectly and with each having individual distinction, I regret that this narrator, Karen Cass, was very disappointing. She seems to merely "read" the book, often rather fast, and without the special dignity these characters deserve. Amelia sounds like a fussy hen and even sometimes seems to have a lisp, while Emerson sounds like a jolly schoolboy. I believe there is a Barbara Rosenblat version available and hope that audible will include it very soon, as I had to stop listening to this version and return to my hardback book. For this reason only three stars.

For Peabody addicts a must read.

Elizabeth Peters captivates her readers once again. nobody could read the work better than Barbara Rosenblat. Karen Cass's reading in its own right does justice to the text.

I was delighted to find an Amelia Peabody I hadn't even read, let alone heard, but I was really disappointed with this. I'm afraid it's not amongst Elizabeth Peters best efforts, but even worse the narrator wasn't Barbara Rosenblat.

The voice is pleasant, but I kept hearing another narrative alongside it, much richer more varied and better modulated. It just wasn't Amelia, it wasn't Emerson and it wasn't Ramses. It wasn't even Neferet, who isn't my favourite character.

What can I say? Though it was nice to fill in one of the missing years I was really disappointed! Please Audible, find a few more Amelias, - with the 'right' narrator

A shame it's not Barbara Rosenblat

I really enjoy the Amelia Peabody series and have become quite attached to the characters. Unfortunately, this narrator, although clear, does not capture the essence nearly as well as the usual Ms. Rosenblat. I have noticed that on the American site they have this book read by Barbara Rosenblat, and more of the series that are not available to us in the UK - please Audible, see if you can sort this out!

If you have listened to any other Amelia Peabody don't buy this one,you will be disappointed.I couldn't finish it,the narrator completely destroyed the book by her interpretation of the characters.It should have had a highlighted warning telling listeners it was not Barbara Rosenblat.

The reader spoilt this peabody mystery for me. i had to switch off. i am used to Barbarah Rosenblat, brilliant reader voice manages all the different characters and the many nuances that give character and keen whit. Black humour requires an expert and your reader is not.

For any fan of Elizabeth Peters audio books, this one is guaranteed to disappoint due to the ill-advised and ill-matching selection of narrator. Ms Cass completely fails to understand the characters and her odd selection of accent and stumbling delivery of foreign words meant that for the first time I wasn't transported into the world of the Emersons. Knowing this isn't Elizabeth Peters' fault, I switched off and went to read the book instead!

A reasonable story, but shame about the narration

Whilst I agree with many of the other reviewers about this not being one of Elizabeth Peters' best efforts for her Peabody character, it is a pleasant enough story. What makes it seem worse, though, is the very poor narration style of Karen Cass (sorry, Ms Cass). One cannot lay the blame on her, though, as it is not her fault that she has an unsuitable style as a storyteller for this medium - one must lay the blame firmly at the door of the publisher and, if there even was one, the director!

It is true that Barbara Rosenblat brings an extraordinary dimension to the novels she narrates, particularly the Peabody adventures, but there are many, many narrators who "play" the characters extremely well too. For example, a notable male voice who is surprisingly good with female voices is Richard Armitage and he would have done a far better job than this flat and lifeless attempt.

Shame on you Oakhill Publishing Ltd - you have upset a very loyal following of an endearing series.

Incidentally, if it is true that there is another version around with, hopefully, a better narrator, I would happily remove this one from my library and buy it.

The most appalling narration I have encountered. The reader shows no understanding of timing, her accents are awful, she has zero grasp of the personality of the characters or the context in which the dialogue takes place. All this compounded by the knowledge that Audible USA customers have a different version read by the wonderful Barbara Rosenblat. Sort it out Audible - get us the US version!

Oh dear even if a Peabody fan avoid this one

Quite appalling choice of narrator - definitely not Barbara Rosenblat - why the publishers should chose a young voice for an ageing Peabody with grown children is quite beyond comprehension. Probably not the best story of the series either but totally spoilt by the narrator

The story was good, but narrator spoiled this book for me and I was disappointed.

Adorably enjoyable Series,ove the writer, but I don't appreciate this narrator. So long for Barbara Rosenblat again.