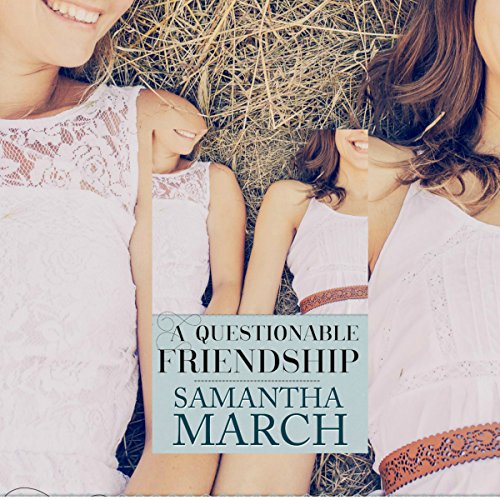 Brynne Ropert and Portland Dolish have been best friends since being paired as roommates in college. Seven years later they are now 25, married, and living in Maine - but the two women couldn't be more different. Brynne finds fulfillment in her life as a wife, mother and owner of a small cafe and bookshop, but is struggling to expand her family. Portland is still coping with her mother's death during her childhood, and her marriage is unraveling before her eyes. Portland envies her friend's seemingly stable and easy life while Brynne doesn't understand the growing distance between them and cannot begin to guess what secret Portland is hiding about her husband and crumbling marriage. While one woman feels shut out, the other enters into a web of lies to protect herself.

A Questionable Friendship explores what really makes someone a true friend, a support system, a sister. How much trust goes into a friendship and when is being a friend not enough? Brynne and Portland's story will attempt to answer those questions, and show that happily ever after isn't in the cards for everyone.

What listeners say about A Questionable Friendship

A Questionable Friendship was my first book by Samantha March. Her description of the characters captivated me. Her book makes you question so many things in your own life. Great story, writing and I will certainly continue listening to more of her books.

A story that hit home.

You'll laugh, you'll cry. This story will stay with me forever. Love the characters. ❤

What made the experience of listening to A Questionable Friendship the most enjoyable?

The Narrator's ability to keep me engaged in the story.

Have you listened to any of Margaret Glaccum’s other performances before? How does this one compare?

The last chapter and epilogue.

Margaret Glaccum's professional narration kept my interest and attention throughout. Between a great story and captivating narration, I listened/read the book in two days!

why do some narrators that read some of these books always sound like there bored out of their minds when there reading these books?