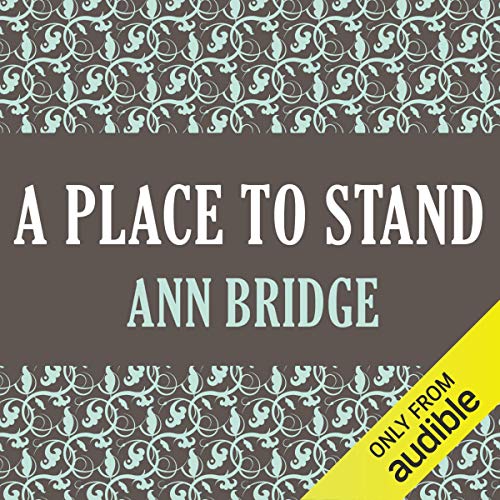 A Place to Stand

Set in Budapest in the spring of 1941, Hope - a spoilt but attractive society girl and daughter of a leading American business man - finds herself playing the lead in a dangerous and most unexpected affair of underground intrigue, through the machinations of her journalist fiance. During the course of her activities she falls in love with a Polish refugee, and at the moment when Germany invades Hungary, she is already deeply involved - both emotionally and politically. Bridge, herself an eye witness of these events, tells in moving and graphic terms the terrible story of Germany's 'protective' invasion; although it is presented in the form of an imaginative episode, the historical significance and accuracy are all too tragically evident. This admirable novel is at once a charming love story in the shadow of fear and disruption, a subtle and intimate portrayal of human beings in a time of crisis, and a most exciting narrative, set against the enchanting background of Budapest.

Ann Bridge (1889-1974), or Lady Mary Dolling (Sanders) O’Malley was born in Hertfordshire. Bridge’s novels concern her experiences of the British Foreign Office community in Peking in China, where she lived for two years with her diplomat husband. Her novels combine courtship plots with vividly-realized settings and demure social satire. Bridge went on to write novels around a serious investigation of modern historical developments. In the 1970s Bridge began to write thrillers centred on a female amateur detective, Julia Probyn, as well writing travel books and family memoirs. Her books were praised for their faithful representation of foreign countries which was down to personal experience and thorough research.

What listeners say about A Place to Stand

A story we need to hear.

Ann Bridge was a very fine writer. She lived in embassies in several countries. Her grasp of the politics mixes with an unusual grasp of the people and natural world of these countries. Each of her pictures of Hungary, Albania, China and the other countries she lived in is a delight in the story and a learning experience done in a clever fictional situation. The narrator of this story does it no favor. A poor reader, with several mispronunciations, she sounds even more naive than the heroine should. Too bad because the story is much stronger than she creates.

A moving story, superbly written, with such vivid portrayal of Hungary and of Budapest in 1940-41, under the German preventive invasion of Hungary, already visited in Bridge's previous story. A labour of love, her drawing "a tutto tondo"of the main characters and her still quite good impressionistic sketches of the support characters.
I admire her exceptional understanding of the social and political setting, and her ability to turn what in realistic terms must have been a tragedy into a drama with a relatively happy ending, and a softening of the atrocious reality of perquisitions and interrogations by the Gestapo police.
The only insupportable thing is the horrible diction of the reader.
She cannot even follow punctuation correctly, pausing at random, interrupting the flow of narration; it puts one in mind of a tap under excessive pressure, spurting violent jets of fluid, rather than a continuous flow of water, and to top it all, she cannot pronounce even foreign words which have been long accepted in the English Language, let alone French or Italian or German ones, (I don't know about Hungarian ones), nor well known foreign personal names. It's surprising, withe the linguistic tools available to anyone today, that any reader, would not take the care to get information about the proper pronounciation of words in any language, and there is nothing more distracting and detracting from the pleasure of listening to a story, than hearing familiar names mispronounced
and distorted.
If you have an opportunity, I suggest you redo the audio book with someone else.