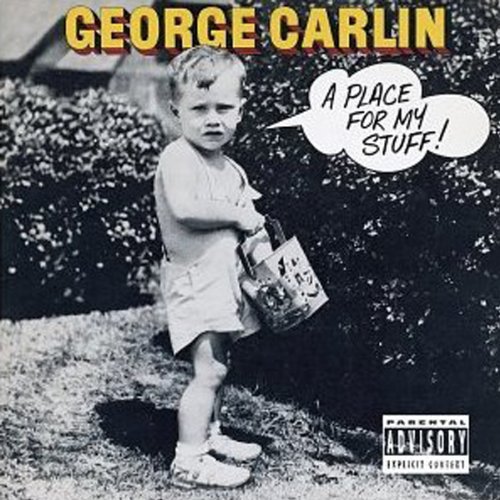 A Place for My Stuff!

A Place for My Stuff!

Classic Carlin all the way. This is his eighth comedy album after a five-year break. Unlike earlier releases, A Place for My Stuff contains a number of studio tracks in addition to live performances, and he pokes fun at the format and candor of community radio, commercials, and television with aplomb.

"A Place for My Stuff" is a classic comedy routine that never gets dated, mostly because it is true - it applies to anyone and everyone worldwide. Our lives are dedicated to acquiring/moving around our stuff!
Not just for Carlin fans - anyone would like this routine. The other entries on this CD, however, could possibly offend delicate ears. Lots of naughty words not meant for young listeners.

Carlin's use of the English language is a masterpiece in audio, he says things that people think about, but couldn't vocalize.

George is so insightful. His analogies of every day life are freakin' hilarious! I miss him so much! RIP George, you were one of the great ones!!!!

One of Carlin's Better Albums

If you could sum up A Place for My Stuff! in three words, what would they be?

I do not think this is his best album, but it is certainly one of his better ones. I have listened to it multiple times.

a lot of studio stuff very little actual stand up.

i was expecting a stand up show. which had parts of that were good. but a lot of fake funny commercials and the like that I wasnt expecting.

A good classic comedy , sad its only 52 minutes .
I paid cash for this and it may have even been on special in my wish list , Don't use a credit . nothing less than 1 hour should be more than $5

This was my introduction to George Carlin, at an age young enough not to understand all that this masterpiece offered. Still a favorite!! Listen, you'll love it!