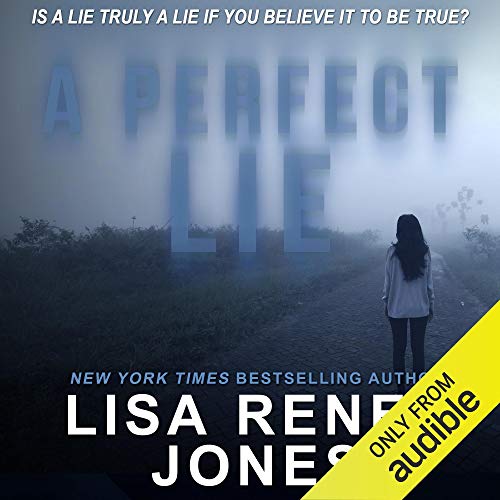 I'm Hailey Anne Monroe. I’m 28 years old. An artist, who found her muse on the canvas because I wasn’t allowed to have friends or even keep a journal. And yes, if you haven’t guessed by now, I’m that Hailey Anne Monroe, daughter to Thomas Frank Monroe, the man who was a half-percentage point from becoming president of the United States. If you were able to ask him, he’d probably tell you that I was the half point. But you can’t ask him, and he can’t tell you. He’s dead. They’re all dead, and now, I can speak.

What listeners say about A Perfect Lie

Narration was above and beyond!

This is just what I needed after reading heartbreaker after heartbreaker. I have read a couple other Lisa Renee Jones romance books and they're always fantastic. The Perfect Lie has to be my favorite book written by this author though. From the very start of this book it was impossible to put down. I was wrapped up into Hailey's life. Hailey was groomed her entire life to be the President's daughter, to be the people's first daughter. She was expected to be more... to be the best and to never make a mistake. The problem is, Hailey is only human. Miss Jones weaves a masterful story. It's a story that's surround by an intriguing and deception. I loved the way this book reads like a journal with a now and before. I feel like we get a bit more out of Hailey's mind with this method of writing. The writing is done perfectly. There's a smidge of romance... which is the perfect amount because murder always brings out sex, money, and politics. I felt like the author really captures how badly children want to make their parents happy, to make them proud. Poor Hailey must have felt like she was up against an impossible task with her father. Hailey is a likable character. I really rooted for her. I disliked most of the other characters and like Hailey, I didn't trust anyone! Love the twists and turns... I still have a few questions. I do hope we get a bit more from Hailey! The narrator, Eva Kaminsky, was seriously a 5 star narrator. She gives us Hailey's side of the story with this quick and no-nonsense voice that I couldn't help but love it! Her pacing and tone throughout the entire nearly 10 hours made me unable to pause. This is definitely a narrator to watch for!

I do not normally read books like this but I was sucked in from the 1st sentence. This book was in my recommended to read section and I am so glad that I did. Eva Kaminsky did an amazing job. She made this audible book come to life and the narration was on point. This book had me guessing at every turn. Hailey Ann Monroe has become one of my most favorite characters now. She is strong willed and very likeable. LR Jones did an amazing job letting you get into Hailey's head and let you know what she was thinking. I really wanted Hailey to come out on top and get her HEA. There were times when I listened to this story and my stomach turned for her and it really pulled at my heart strings. I highly recommend this book.

Not a romance! More political thriller...

I hardly ever write reviews, but this was so bad I had to take the time to save someone else. Absolutely horrible! Everything about it— characters, how the story unfolded, the ending— AND there was no romance! Isn’t that the point of Audible Escape?!? But even for a political thriller, this didn’t do it for me. Save yourself.

Although the book has positive ratings, I found it to be repetitive, slow, and predictable. I was anxious to get to the end.

Good god, this was sooo repetitive! Poor Haley, bad daddy, poor Haley, it never ends. 14 chapters in and STILL it’s nothing but whining poor Haley. The story has not even advanced beyond her friend stayed at a bar, she doesn’t remember, friend now missing. She goes on and on about not remembering. Where was the editor?! On top of that monotony was the narration, I really got tired of the story being spit at me rather than told. Short, choppy, angry over dramatic “narration” was just irritating. I wound up hating her whiney self. Stopped at Chapter 15, didn’t even care what actually happened.

not a romance. the negative reviews were on point

I skipped to the end. Glad I didn't waste the credit. Wtf. This isn't one of her best books.

What? What is happening in this story? What editor was used? Or did they use an editor? The main character is as whining and self-involved as the writing style. The story ambles along some path, as if the author were picking it out in the dark with a dim flashlight. It feels as though she is making it up as we go along, with no need to go back and clarify earlier in the story. This could have been told with about 2/3 less words. She flashes back so many times and has so many “memories” that the entire first half could have been told in flash backs and saved the reader (listener) a lot of time. Basic character descriptions that define motivations are still being revealed more than half way through the book, as if to say- oh ya, and then there’s this about the main character so this part of the story “makes sense” or the plot can go forward. One has to wonder how this type of amateur writing gets published in the first place.....

The narrator was good especially when I put it on 1.5 or 2.0 speed. The story was somewhat interesting, but soooo full of angst that I almost stopped listening about halfway through. It really needed some editing to pull out some of the constant internal questioning the main protagonist puts herself through. The book would be at least one third shorter without so much whining and moaning.

Interesting outline, but there were too many gaps in details that are like Haley’s blackouts. I like this author so this leaves me disappointed.

I forced myself to finish this book. I found the heroine full of angst and lacking a backbone. Too many plots to to keep up with. I was very disappointed as LRJ is one of my favorite authors & I have read & enjoyed her books for years.