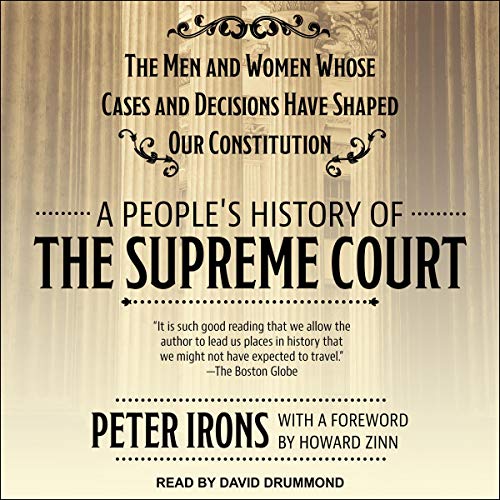 A People's History of the Supreme Court

A comprehensive history of the people and cases that have changed history, this is the definitive account of the nation's highest court.

Recent changes in the Supreme Court have placed the venerable institution at the forefront of current affairs, making this comprehensive and engaging work as timely as ever. In the tradition of Howard Zinn's classic A People's History of the United States, Peter Irons chronicles the decisions that have influenced virtually every aspect of our society, from the debates over judicial power to controversial rulings in the past regarding slavery, racial segregation, and abortion, as well as more current cases about school prayer, the Bush/Gore election results, and "enemy combatants".

To understand key issues facing the supreme court and the current battle for the court's ideological makeup, there is no better guide than Peter Irons. This revised and updated edition includes a foreword by Howard Zinn.

What listeners say about A People's History of the Supreme Court

Might listen again. Really shows you how messed up the USSC has been populated by crazies from the beginning. What we're seeing now is nothing new.

Supreme Court wasn't all that Great

This story tells about the Supreme Court, its judges and the cases brought before it. It surprised me that some really not so great people were Supreme Court Judges.

Preface: I am fascinated by the Supreme Court. I never really considered myself a student of history, I am after-all a science teacher. I loved this book, it was more of a history of the US with the court being used as the focus throughout the last 250 years.

My only wish would be that I could come back in the year 2300 and read the authors next installment.