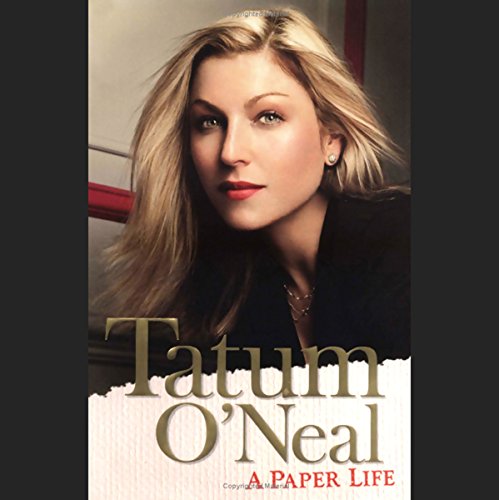 Filled with stunning revelations, here is the sensational memoir of one of Hollywood's most talented and troubled stars - an inspirational true tale of survival and triumph against all odds

Though she has shunned the media spotlight, Academy Award-winning actress Tatum O'Neal at last goes on the record to tell her story - a tale of personal turmoil and ultimate triumph that is part Hollywood tell-all, part Greek tragedy, and part Shakespearean drama.

In her trademark no-holds-barred style, she names names as she chronicles the ups and downs of being Hollywood royalty, including:

Ultimately, we see the emergence of an extremely gifted, spirited, and intelligent woman - the ultimate survivor who is a role model to all women.

"In this honest, disturbing memoir, O'Neal...reveals the behind-the-scenes story of her lonely, chaotic life." (Publishers Weekly)

What listeners say about A Paper Life

A lifelong fan of Tatum O’Neal I looked forward to this book. I looked for this book. Tatum as reader is understandable but unnecessary and lack luster which she reads it ruins it. I think. I could never discern whether the book was dreadful because of the writing, the reading, or Tatum’s life was insanely wealthy but dysfunctional. Welcome to America. Therefore, over-privileged shrugging on top with-poor-little-rich-girl underneath with the latter getting old very quick and often.

listened to 80% of it in just one sitting, very compelling book, great bio and even greater reflection of the consequences of having children.

started out strong, but ended weakly

a little over half way through it turned into a typical "everyone is wrong" and "poor me." although i stayed with it, i found my interest waning and found myself yelling at specific comments made by Tatum. i am looking forward to reading McEnroe's book now to find out his side of the story.

the most interesting part of the book revolves around Paper Moon, and how she got there.

Barely goes beneath the surface. Leads with shocking statements of occurrences, then on to the next bombshell with little detail. Im left to believe due to narcissistic absentee parenting and personal drug consumption, perhaps she is left with low affect, or simply was rushing out a book for balancing finances. Mesmerized by the glimpses, Im off to other sources for all the finer details.

I loved every minute of this book. It will make you smile, cry and think. It was amazing! I wish nothing but the very best for Tatum! She is a Hollywood icon and strong woman!!!

You cannot choose your parents, yet they have a profound effect on your life. Tatum's story makes you think about relationships and the choices you make.

This account is painfully honest and heartbreaking to listen to at times. It exemplifies that mad highs and lows of fame and wealth from a woman who seems to only be searching for something real and true. No one in her life and in the book is dashed but treated as the complex humans they are. I was fascinated by every word and hope the writer continues to heal and blossom. Tatum is a greatly underestimated actress.

I’ve just finished A Paper Life. This is a story about a young beautiful child who was raised by parents
who were so self absorbed they had no idea how to connect with their own children.
By not focusing on she and her brother, Griffin, they were caste out into the world without any tools to protect themselves.
So sad to read, it’s nearly impossible to not tear up over and over. But Tatum has overcome her childhood and marriage to a man named John who , it turns out, was no better than her abusive father.
Do I sound angry? Yes and you will be too.
It’s a lesson in how not to treat your children
or anyone for that matter.
Tatum, Griffin and Redmond, have survived so far.
Hopefully the truth of Love will win.

Felt bad for Tatum so many times throughout this book . I couldn’t stop listening though. I don’t like Ryan O’Neal at all! The stories about him during her childhood and into adulthood are horrifying.

This was a wonderfully told story

This was a wonderfully told story. I enjoyed learning about her life. We all have things we need to overcome.