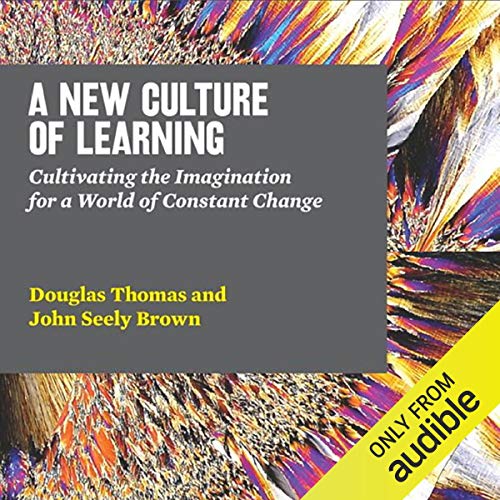 A New Culture of Learning

A New Culture of Learning

The 21st century is a world in constant change. In A New Culture of Learning, Doug Thomas and John Seely Brown pursue an understanding of how the forces of change, and emerging waves of interest associated with these forces, inspire and invite us to imagine a future of learning that is as powerful as it is optimistic.

Typically, when we think of culture, we think of an existing, stable entity that changes and evolves over long periods of time. In A New Culture, Thomas and Brown explore a second sense of culture, one that responds to its surroundings organically. It not only adapts, it integrates change into its process as one of its environmental variables. By exploring play, innovation, and the cultivation of the imagination as cornerstones of learning, the authors create a vision of learning for the future that is achievable, scalable and one that grows along with the technology that fosters it and the people who engage with it. The result is a new form of culture in which knowledge is seen as fluid and evolving, the personal is both enhanced and refined in relation to the collective, and the ability to manage, negotiate and participate in the world is governed by the play of the imagination.

Replete with stories, this is a book that looks at the challenges that our education and learning environments face in a fresh way.

“A provocative and extremely important new paradigm of a ‘culture of learning’, appropriate for a world characterized by continual change. This is a must read for anyone interested in the future of education.” (James J. Duderstadt, President Emeritus, University of Michigan)
“Thomas and Brown are the John Dewey of the digital age.” (Cathy Davidson, Professor of Interdisciplinary Studies, Duke University)
“A New Culture of Learning may provide for the digital media and learning movement what Thomas Paine’s Common Sense did for the colonists during the American Revolution— a straightforward, direct explanation of what we are fighting for and what we are fighting against.” (Henry Jenkins, Provost’s Professor, USC)

What listeners say about A New Culture of Learning

This is a MUST read for any parent/academic or business exec.

The way we're working is changing and this puts it into perspective.

Scouts, Sport and the "new" culture of learning.

These were in place long before gaming. My fear is gaming is not authentic learning. Nothing new here, move along citizens.

I'm usually a big fan of JSB. I read his PARC stuff at the Uni, and always found him incisive and original. How disappointing then this book -- which is a dull, staid, academic rehash of material found elsewhere. Authors bring nothing new to the party, except 10,000 feet generalities and observations. Yawn. If you want to explore the revolutionary potential of social media, I'd reccomend Clay Shirky -- even Seth Godin -- over this turgid, unoriginal tome. There's nothing new here that hasn't been said better elsewhere.