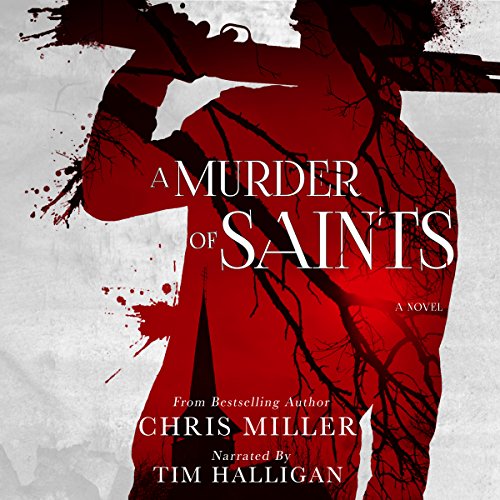 A Murder of Saints

Sophie Fields is a little girl tortured by her memories of Damien Smith, a much-loved and respected church elder with a secret lust for the unmentionable. After his misdeeds are covered up by church leaders, she climbs to the roof of her house and jumps to her death, right in front of her shocked brother, Charlie.

20 years later, detective Harry Fletcher is still haunted by the personal demons associated with the church cover-up. After losing his faith, his wife, and now his partner, Fletcher learns that Charlie Fields has come back to town with one mission: to kill everyone responsible for his sister's death. It is Fletcher's job to track and stop the crazed killer.

But as it becomes clear who the main targets are, Fletcher finds himself in the midst of a moral quagmire. Although he sees justice in Charlie's crusade, the killer seems to be taking out others not responsible for his family's destruction. As Fletcher and his new partner battle each other in a test of ideology and limits of the law, the real demons show up and change everything.

In this chilling tale of suspense, revenge, and evil, a police detective wrestles with his moral conscience while attempting to stop a serial killer avenging his sister's death.

What listeners say about A Murder of Saints

Wow! "A Murder of Saints" is absolutely one of the most thought provoking thrillers I've read in a while!

The story follows a man whose younger sister was molested as a preteen by local church leaders. Justice was never served at the time, and the young girl commits suicide. Her older brother doesn't do well after the incident, and comes back 20 years later with revenge on the mind.

The story unfolds from the perspective of more than one character, including the murderer.

What I love most about this book is that it presses you to think about the greater damage that our corrupt Justice system plays into. What I will warn you about: the book is can be quite morbid, and it covers several uncomfortable topics. If you're easily squeamish or don't enjoy true horror books, this is not the book for you.

The narrator is fantastic, and I would gladly listen to him read other books!

I absolutely recommend this book if you're into suspense, thriller, or horror novels. This will absolutely be a perfect read!

This book will surprise you should you stick with it - well read and engaging!

Twenty years ago, 12 yo Sophie Fields jumped off the roof of her home. She and several other kids accused a prominent church member of molestation. The church elders paid off most of the families. The two families that took the church to court were belittled and ostracized...and lost the case. Sophie’s mother collapsed and died and her father committed suicide. 15 yo Charlie was left an orphan and placed in foster care. Present day...Charlie Fields is back and seeking revenge on the men who destroyed his family. As the bodies pile up, homicide detective Fletcher, whom, coincidentally was a church member that left...and had also arrested the pedophile...is racing against the clock to stop Charlie’s reign of terror. Just when you think you have a handle on this story...enter demonic entities...who kidnap Fletcher’s ex wife and daughter! This book is chocked full of drama and suspense...with Fletcher’s partner trying to explain why evil exists and why we shouldn’t blame God when bad things happen. The ending though...wowwww! Great book and compelling narration!
I received a complimentary copy of this book in exchange for an unbiased review.

If you like old time detective novels, you'll love Chris Millers A Murder of Saints. Chris tells a tale like the old time detective stories with similes and metaphors galore. You feel for the detective and the culprit. Some strong language. Compelling story and Tim Halligan brings it alive. Listened to it during my commute to and from work. Hardly noticed the traffic.

'A Murder of Saints' is a classic revenge story, in my book at least! When the abuse from a pastor results in the death of his younger sister, Charlie is haunted for the rest of his days. Finally, he has no choice but to seek revenge on all of those who caused his sister's death. While he pursues this endeavor, Detective Fletcher is tasked with hunting him down and stopping him. I won't say more for fear of spoilers, but I will say that this was a fast-paced and very satisfying murder mystery novel. I would recommend this one to anyone who enjoys this genre!

This was a most satisfactory read, with a good, brooding feel. Unaddressed injustice can be a deeply corrosive thing. It seems we do need heroes, however much we fall short of righting wrongs and rising from the ashes in real life

Not For Faint of Heart

This is the 1st book I’ve listened to by author and really enjoyed it. It is full of violence, gore, revenges and nauseating descriptions. My favorite character was Harry Fletcher tracking down Charlie Field who not only kills Damien Smith (the reverend responsible for his sister’s death and finds he loves killing). Good narration with surprise ending. Write more horror books. Recommend this gruesome suspenseful thriller with strong stomachs. I was given this free review copy audiobook at my request and have voluntarily left this review. THANK YOU

True thriller from the beginning

This book has my attention from the start. I don’t usually say books are riveting but , I feel like this one lives up to that word.

Narrator is incredible. He helps builds the suspense and keeps wanting to hear what comes next. Highly recommend “A Murder if Saints”

Was pretty good until demons got involved

The story started out strong. I was fully into the plight of young Charlie and his plan for vengeance against those responsible for ruining his family’s life. Then the stupid demons showed up. I equate Tossifus with Jar Jar Binks from Star Wars...completely unnecessary and taking away from the original plot, which was just fine on its own. In the end, I couldn’t wait to finish (I had to as I was already committed) so that I could move on to less absurd literature.