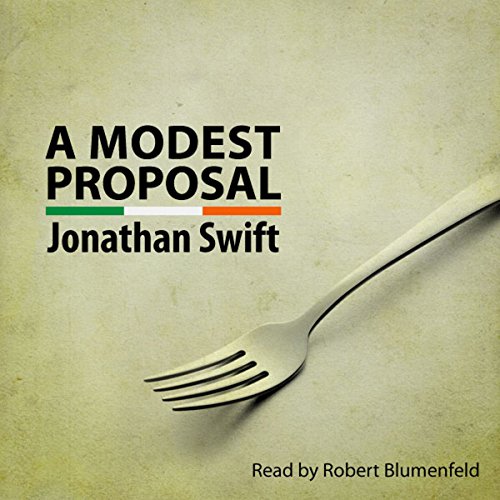 Narrator Robert Blumenfeld understands the sardonic attitude of Jonathan Swift's Juvenalian satire perfectly, and he utilizes a pompous, flowery tone in his performance with obvious relish. Swift suggests in his essay that the impoverished Irish might improve their lot by selling their children as food for rich gentlemen and ladies. Much like Swift, Blumenfeld doesn't hold back and describes the possible preparation styles for the children and calculations showing the financial benefits of cannibalism with humorously exaggerated condescension and smugness. Listeners will be truly entertained by his fun approach to Swift's most famous work.

A Modest Proposal for Preventing the Children of Poor People in Ireland From Being a Burden to Their Parents or Country, and for Making Them Beneficial to the Public, commonly referred to as A Modest Proposal, is a Juvenalian satirical essay written and published anonymously by Jonathan Swift in 1729. Swift suggests in his essay that the impoverished Irish might ease their economic troubles by selling children as food for rich gentlemen and ladies. By doing this he mocks the authority of the British officials.

A Modest Proposal is included in many literature programs as an example of early modern western satire. It also serves as an exceptional introduction to the concept and use of argumentative language, lending itself well to secondary and post-secondary essay courses. Outside of the realm of English studies, A Modest Proposal is a relevant piece included in many comparative and global literature and history courses, as well as those of numerous other disciplines in the arts, humanities, and even the social sciences.

What listeners say about A Modest Proposal

Not a bad proposal at all

This audiobook is a collection of Swift's essays, letters, and other works. The best known of these is "A Modest Proposal" wherein the author puts forward a rather original scheme to solve the problem of the poor children of Ireland. As this is a renowned piece of literature most of you probably know what he had in mind, if you do not, the fork on the cover can be taken as a hint.

I am not sure if one was supposed to enjoy this bitter satire but I did. However, if I were to pick my personal favourite, I would go for "Directions To Servants" which was not bitter at all and made me burst out laughing every now and again.

There were some minor pieces I could not get into the spirit of, particularly the letters, many of which felt "out of context". You cannot help admiring the language though.

On the whole I can recommend this audiobook. Not everything in it is brilliant but there are some real gems to be found.

The audiobook give you a very good collection of Jonathan Swift's sermons, short essays, letters, and pranks over his years. If you are looking to explore his writings more, this collection should point you in the right way.

Where does A Modest Proposal rank among all the audiobooks you’ve listened to so far?

What other book might you compare A Modest Proposal to, and why?

What does Robert Blumenfeld bring to the story that you wouldn’t experience if you had only read the book?

There is no actual list of what's included in the the description so here it is.

The story of the injured lady

The answer to the injured lady

The death of mr partridge

A vindication of Issac bickerstaff

The abolishing of Christianity

A hue and cry after dismal

A sermon on false witness

A letter to a young gentleman

A proposal for the universal use of Irish manufacture

On the death of mrs johnson

A short view of the state of Ireland

An examination of certain abuses etc in Dublin

Directions to the footman

A Classic Work of Satire Brought to Life

What did you like most about A Modest Proposal?

The history and bang up to date nature of the text

The letters to the Irish (or about) are all exceptional

What a very brave man he must have been?!

Each chapter is a stand alone piece which is handy