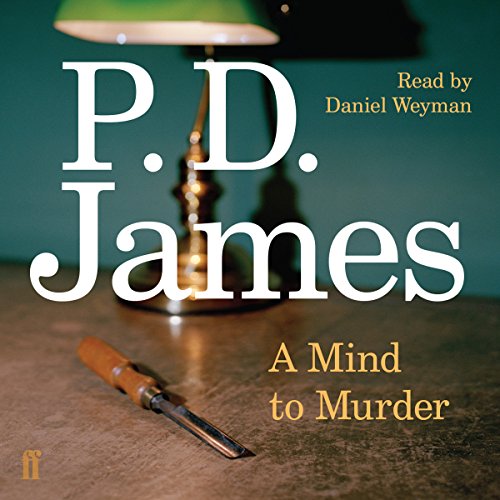 A Mind to Murder

A Mind to Murder

An Adam Dalgliesh mystery. Set in London, A Mind to Murder is the second novel in the Adam Dalgliesh series and a thrilling work of crime fiction from P. D. James, the award-winning author of Death Comes to Pemberley and The Children of Men.

A piercing scream, shattering the evening calm, brings Superintendent Adam Dalgliesh hurrying from his literary party to the nearby Steen Psychiatric Clinic, where he discovers the body of a woman sprawled on the basement floor, a chisel thrust through her heart.

As Dalgliesh probes beneath the apparently unruffled calm of the clinic, he discovers that many an intrigue lies hidden behind the Georgian terrace's unassuming façade. Professionally he has never known the taste of failure. Now, for the first time, he feels unsure of his own mastery as he battles to unmask a cool killer who is proving to be his intellectual equal and who is poised to strike again.

P. D. James (1920-2014) was a best-selling and internationally acclaimed crime writer. She was the creator of Adam Dalgliesh and Cordelia Gray and their long and successful series of mysteries. Her works include Cover Her Face (1962), An Unsuitable Job for a Woman (1972), Innocent Blood (1980), The Children of Men (1992), and the Jane Austen-inspired Death Comes to Pemberley (2011). James was born in Oxford in 1920. She won awards for crime writing in Britain, America, Italy and Scandinavia, including the Mystery Writers of America Grandmaster Award. She received honorary degrees from seven British universities, was awarded an OBE in 1983, and created a life peer in 1991. In 1997 she was elected president of the Society of Authors and stood down from this role in 2013.

"Unlike so many crime writers, James still has the power to move, fascinate and astonish." ( Independent)
"P.D. James is simply a wonderful writer." ( New York Times Book Review)
"One of our greatest living crime writers." ( Daily Express)

What listeners say about A Mind to Murder

Where does A Mind to Murder rank among all the audiobooks you’ve listened to so far?

P. D. James is a classic writer in this genre. she is up there with Christie and Sayers as my favourites when it comes to crime fiction.

Adam Dalgliesh, he is sensitive, intelligent and direct. His character adds weight to his approach in solving the crime through his self reflection and strong ethical standards.

Have you listened to any of Daniel Weyman’s other performances? How does this one compare?

Daniel has a great voice and narrates the story well, I find it really relaxing to listen to.

Another great story excellently narrated by Daniel Weyman. Love his varied voices for each character. So very enjoyable.

A mind to murder fails to elicit a mind to read!

The narrator does an excellent job of bringing to life characters, who, may have otherwise struggled to make a lasting impression. A Mind To Murder pales, in comparison to other Adam Dalgleish stories, but not enough to prevent me from revisiting others in the series. The characters are unremarkable, and often indistinguishable. I struggled to muster, a liking of, or sympathy for, any of them. Even the normally, enigmatic Dalgleish, is lacklustre. PD James' word choice can be irksome. I feel like she uses obscure words, to let us know, that she knows them, rather than their suitability. I enjoy seeing how many times she uses the word "incongruous", she uses it so often, I wonder if it's intentional. It could make a good drinking game. 😀 The Steen Psychiatric Clinic, is not only the setting for the murder, it's the book's saving grace. I found its depiction fascinating. I envisage it as an omniscient onlooker, privy to its incumbents darkest secrets, indignant at the deadly crime it witnessed within its walls. Its presence felt tangible, throughout the story. It was the only star of the show. I felt like a vicarious onlooker, who had been afforded a voyeuristic, fly on the wall in insight into the Steen Clinic, through the eyes of the clinic itself. I like to think of "Tigger" as The clinic's familiar, it would be nice if that was what PD James intended. Overall 3/5 Not bad, a little disappointing.

An excellent whodunit with a surprise ending very cleverly achieved.

There are lots of crime books out there but this is up there with Ian Rankin at his best.

Better than I expected!

The P.D. James novels are light entertainment for me. I very much enjoy Daniel Weyman's reading of them because he plays the characters and makes it as interesting as if I was reading them myself. I've heard several now and didn't have any particular expectations and enjoyed this more than some of the others. I nice, light listen; well read.

I love all of P.D.James' stories and this is a very early one, before she made Dalgleish such an interesting character. It's set in the 60s but feels more like post-war 1940s and some of the attitudes towards women will sound extremely dated to modern ears (especially as it's written by a woman). Definitely not her best work but Daniel Weyman weaves his usual magic with the excellent narration. I think I might have seen a television adaptation of this story as I kept seeing mental pictures of some of the scenes. Either that, or my inner screenwriter was working overtime as my mind wandered from this ponderous tale.

First of all you get the 1st body in the basement of the clinic where she worked unfortunately there are many suspects both staff and patients, and not only that she's the most disliked member of staff.
I hope you enjoy the book like I have.
PD James and Agatha Christie are both excellent crime writers and both of them like to put little red herrings in just to fix you

I got to the halfway point of this and started again. There are so many characters, many doctors, all referred to by their surname, introduced in rapid succession. Halfway through I realised I'd totally lost track of who was who. Even on a second go through I had to concentrate pretty hard! This would likely not be such a problem with a written version as it's much easier to flick back and forth. Anyway, I enjoyed it in the end and the narration is very good indeed.

Great storyline, fabulous narration. This is the second of P.D James I have listened to. Looking forward to the next one.

very well read making it easy to follow the twists and turns. as always PD James draws out the detail without becoming boring or over done.

An early Adam Dalglish novel. Good storyline, narrated well. Even though AD is his usual good and pleasant detective his love life is a bore.