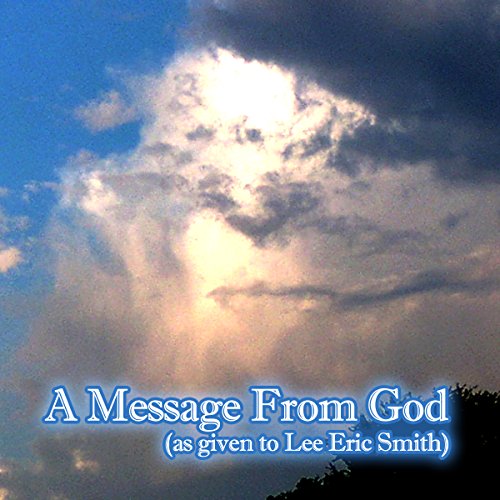 A Message from God

A Message from God is a free online multimedia project. As the project grows, it will touch millions of lives around the globe, and become a champion for the common good of humanity.

A few facts about A Message from God:

A Message from God is intended for spiritual guidance, not religious dogma. Agreement with its contents is not required, and it makes no claims of superiority over any existing religion, holy text, or belief system.

This messenger, Lee Eric Smith, is one of many messengers. He does not consider himself any more special than anyone else, and is weirded out about writing about himself in the third person like this.

The original inspiration for the project came in October 2006.

The cover image was taken by this messenger on the side of US Hwy 78 between Holly Springs, Mississippi, and Memphis, Tennessee in 2004. Many who see it say they see a face in the clouds. Other than minor adjustments for color and contrast, it has not been altered in any way.

A Message from God was written at about a sixth to eighth grade reading level. The author, God, inspired this messenger to write in simple everyday language to ensure that the powerful ideas presented do not get lost in the words.

Although this messenger was raised in the Christian tradition, A Message from God is deliberately written to sit outside of any particular religious doctrine. It stresses "relationship over religion," and consequently respects all religious traditions for their core purpose: developing a meaningful relationship with The Infinite.

What listeners say about A Message from God

Improves on the dualistic god model.

Enjoyed the brevity and straightforward message herein. This is a definite improvement on the traditional dualistic god and worshipper model, however, it still leaves the basic dualistic premise intact. Will suit some who are seeking for a more positive ‘god’ view.