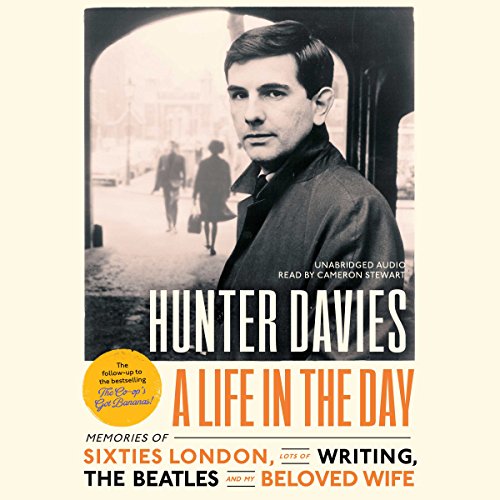 A Life in the Day

In this much-anticipated sequel, Hunter now looks back across five decades of successful writing to reflect on his colourful memories of living in London during the height of the Swinging '60s; becoming editor of Britain's first colour weekend supplement The Sunday Times magazine, where he befriended the Beatles; and reporting on (and partying with) some of the biggest names in television, film and theatre of the day. As time moved on into the 1970s, '80s and '90s, Hunter encountered the likes of Sir Michael Caine, George Best, Melvyn Bragg, Joan Bakewell, Sir Sean Connery, Cilla Black, Paul Gascoigne, and Wayne Rooney, to name a few.

Hunter brings the story full circle to reflect on his years spent with the love of his life - the best-selling writer Margaret Forster, who sadly passed away in February 2016. This will not only be a colourful and enjoyable memoir of what it was like to be at the epicentre of Britain's artistic heart but also an emotional, heartfelt tribute to family, friends and colleagues. For those captivated by The Co-op's Got Bananas!, this sequel is a must listen.

"Ken Loach might have turned all this into a powerful social film, but the avuncular Davies sprinkles in so many cheery anecdotes that the book bounces along enjoyably." ( Sunday Times)
"He recalls his childhood growing up in Scotland and Cumbria in the Forties and Fifties, capturing gritty working-class life with humour and charm and painting a vivid picture of that period of social history." ( Press Association)
"A cheery memoir of the Forties and Fifties.... In among the rationing and the bombsites, this is really a love story between Hunter and his wife of 56 years, Margaret Forster, who died earlier this year.... What sets this book apart, though, is its avoidance of cliché and its determination to reveal everything that might be revealed." ( Daily Mail)

What listeners say about A Life in the Day

A bit one note

I thought that it would be more colourful, possibly more revealing, and while it is an interesting life I could not warm to it. Maybe it is the matter of fact tone of the narrator, or the fact that his wife always seemed critical of the writer, I can't say. It was a great chronicle of the times and worth listening, but oddly dull.

Loved every minute! Want to know more about all the participants. Great follow on from Co-op got bananas!

A wonderful tribute to Margaret Forster

'A Life in the Day' is the second part of Hunter Davies' autobiography, and the follow up to 'The Co-op's Got Bananas: A Memoir of Growing Up in the Post-War North', which I have yet to read.

I bought "A Life in the Day' on a whim when it came up as an Audible deal of the day. The only other book I have read by Hunter Davies is 'The Glory Game', a brilliant study of a season embedded with Tottenham Hotspur FC in the early 1970s.

'A Life in the Day' picks up Hunter's life in the early 1960s and describes his marriage, his family and his professional life. The primary narrative is about his marriage to Margaret Forster and his enduring love for her. It's hard to conceive of a more idyllic partnership. Sadly her recurrent bouts of cancer finally killer her in February 2016, and the final few chapters of this book are about her last months. It's extremely moving and a wonderful tribute.

I was hoping for a bit more on his time with the Beatles and the 1960s more generally. Hunter touches on these areas but as he has written so many books, and newspaper columns, and done many other interesting things, he doesn't dwell on anything for long. The only subject that gets extensively covered is his life with Margaret.

I really enjoyed this autobiography, but I am bias as I have followed his writings for the past 20 years and enjoy his style, humour, but not always his politics, however such is life and Hunter has done good. He clearly was in love with his wife and always in awe of her books, maybe not reciprocated by her, but she was a strong and independent woman, which is just what he wanted, no doubt. The chapters of her passing away were very sad, but written with honesty and clarity.
Great stories and a good insight into his writings from a junior cub reporter...one of his first books I read was the A Wainwrights Biography where I wrote to him saying how much I enjoyed it. He sent me back a lovely postcard of his house in Loweswater saying that I now had my very own postcard of the Lakes...what a charming man and says much about the individual...I wish him all the very best as he embarks on life without his rock!

I didn't read many biographies but I enjoyed this very much. I hope a real Hunter is not far away from a man he described in that book.