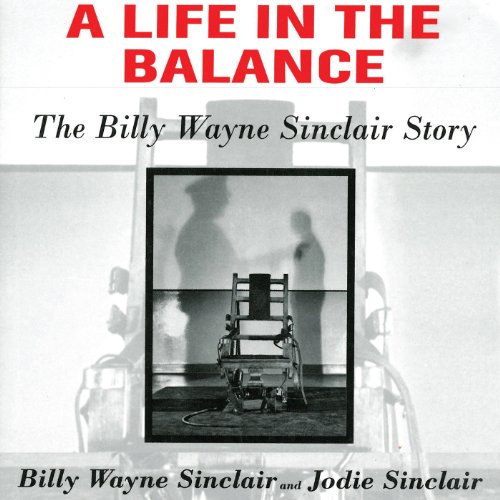 A Life in the Balance

Billy Wayne Sinclair endures abuse at the hands of his cruel father, then grows to become a criminal. In 1965 he murders a store clerk. Once convicted Sinclair enters the prison system and experiences life as an inmate. He eventually has his sentence altered to 90 years, scheduled to spend his life in one of America’s worst prisons. Strangely Sinclair also finds love with a female reporter. In this alarming text Sinclair describes his childhood then lays out in horrific detail the violence and corruption that riddles the prison system. Sinclair bears witness for fellow inmates. This biography is co-written by Sinclair’s wife, and it conveys the gruesome truth without self-pity. Narrator Walter Dixon's earnest delivery conveys the terror and the pathos of prison life.

We all know that life in prison ain't grand, but the utter horror of it springs from the pages of this autobiography, written by a one-time death-row inmate. Billy Wayne Sinclair is now serving a reduced 90-year sentence for murdering a Baton Rouge convenience store owner in a robbery gone wrong more than three decades ago. His story of an adult life spent in one of Louisiana's harshest prisons is amazing, not only because he has survived with his soul intact, but because it provides such a raw look at the inner workings of a system bent on revenge, not rehabilitation.

Sinclair claims he was brutally beaten by his father as a child. But that abuse has been upstaged by the stabbings, suicides, and rapes he has witnessed while in custody of the state. His descriptions of lives lost behind bars are gripping and tragic. Along the way, Sinclair also chronicles bloody integration battles, drug dealing, and political corruption. And he falls in love.

Coauthor and wife Jodie Sinclair was a TV reporter working on a death-row story when the two met. Their unlikely pairing consumes much of the latter half of the book, although the story falls short in conveying the emotional depths of the relationship. The Sinclairs may not win the sympathy of every reader, but they have succeeded at providing a rare view of what happens to prisoners long after the crimes and court dates are over. (Jodi Mailander Farrell)

What listeners say about A Life in the Balance

Tragic Way to spend your life

I wasn't sure how to take this book. I love the genre but this was not entirely what I expected. A great deal of political posturing made this more of a propaganda piece against the Prison System that a story about prison life. Not bad though.

I thought the story was very good and well written...its sad the gentleman had to spend more than 75% of his life confined

Draged on a bit

Would you listen to A Life in the Balance again? Why?

Absolutely. Between Dixon's narration and Sinclair's telling, the harsh realities of prison are laid bare. This book burrowed into my consciousness in a very personal way, so much so that when it was over I was truly lonely.

"Favorite" is not the right adjective for this book, but it would be either Billy Wayne or Jodi Sinclair.

The most riveting scenes should not be retold in the context of audible's general reviews. One needs to hear them in context. It's not a rosy book, so "favorite" is again not the right adjective.

There were nights when I had trouble sleeping. It wasn't a particular scene, but the general tension one has about the horrors of imprisonment.

The narration was awesome.

The story was engaging throughout the entire book.

Shined light on the horrors of prison.

I enjoyed this book great story. glad everything worked out for him. People can change when given a chance.