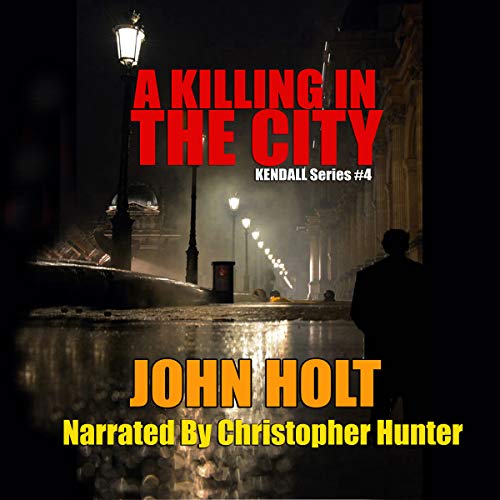 A Killing in the City

A Killing in the City

‘To make a killing in the City’ is a phrase often used within the financial world, to indicate making a large profit on investments, or through dealings on the stock market--the bigger the profit, the bigger the killing. However, Tom Kendall, a private detective, on vacation in London, has a different kind of killing in mind when he hears about the death of one of his fellow passengers who traveled with him on the plane from Miami. It was suicide apparently, a simple overdose of prescribed tablets. Kendall immediately offers his help to Scotland Yard. He is shocked when he is told his services will not be required. They can manage perfectly well without him, thank you.


"Wow! What else can I say? This story is wonderful. Kendall is a likable, memorable private investigater bound by unquestioned values of justice...Individual voices are displayed and all the characters are quite visible in the mind's eye." -

Was this a young person book?

I guess I don't get it. We knew who the villain was from the first. The characters were not believable. I totally failed to be able to suspend my disbelief because no one could be as dumb as the Inspector and the partner were. I kept listening expecting there to be a surprise twist and ending but there wasn't. I knew who did it and why from the very first and I'm not even that smart. This was my first book in this series so I don't know if the earlier stories were better. I thought maybe it was a detective mystery for children. I liked the characters but the writing could have been a lot better. There should have been a surprise like the Baxter character framing the villain for taking over his company.

I just want to say how much I really enjoyed this narrator I have never heard him before and thought he did a great job. Can only hope he does the rest of the Kindle books. This one was intelligent and never boring I really enjoyed it! Can’t wait to read the next one.

Kendall on vacation? Never for this detective.

Book 4 finds Kendall and Molly going on vacation to London. It also reveals the selfish side of Molly and a determination in Kendall in his unwillingness to let go of a case that he shouldn’t even be working. Kendall sits next to a business man on the flight, who reveals to him much information about his trip that will come back to him when the man is murdered, and the police insist his death was a suicide. He’s been warned by the lead detective and the police at home to mind his own business, the case is closed. But Kendall won’t accept the suicide ruling and persists in proving the killing was murder. Where I’ve found Kendall to be somewhat clueless in previous books, his keen senses kick in here. Molly is stuck on shopping and is of no help to Kendall. As in all the previous books, I love Kendall’s witty personality. The narrator’s voice was okay. His tone was pleasant enough, but there was background noise that should have been edited out. I enjoyed this story and recommend it to people who like the old-time detective stories.

Private detective Kendall is off sleuthing in London. Where will his talents lead him??

A Killing in the City: Tom Kendall, Book 4.
The more books I read in the Kendall series the more I think of him as a modern day "Columbo". Dogged and determined to get to the truth, a thoroughly likeable character. The writing style is unusual but suits the Kendall perfectly.
And as usual the criminals conceit is his main downfall (apart from Kendalls efforts).
Really good detective entertainment.
I was given a free copy of this audio book at my own request, and voluntarily leave this review.

I love the Kendall series, but this particular narrator should find another line of work. After hearing him pronounce ask and asked as axe and axed for a couple dozen times I had to stop the story. I apologize to the author but your choice of narrators for this one was not good.

This story drive me nuts. It was very slow, repeated a lot of statements in different ways, and repeat sayings. This book needs a good edit. If it had that it would be a good storyline

I liked the story by line. it reminded me a little of Colombo. Kendall was like a dog with a bone. he kept telling the inspector that the man was murdered. the narrator was a little flat sounding. monotone, but other than that good story

The story developed slowly which allowed me to settle in and learn the rhythms of this author. The plot filled in nicely, the characters were interesting. I liked the thinking of the private eye, he jumped around a lot but always finally focused on the evidences of crime. My mind found this very easy to follow and together we solved the crime.
I was distracted by the narrator so often using the word "aksed" and his verypoor reading of the text. He has a nice voice, I hope he gets more coaching and practice.


Kendall has just completed another case and had promised his secretary / assistant a long holiday in England sight seeing, but he does need to be constantly pushed into actually going.

A good book. Well written murder mystery by the writer. Kendall is back to solving another murder. Good narrating.

The plot was good if a slow. Holt really needs to find a few British narrators for his books, good story , just to slow and corny for me

Another great story from John Holt. Kendall travels to London on vacation only to be dragged into a murder investigation.
Well written, as usual, I could only give four stars for the narrators performance as he mispronounced “ask” as aks, that is a pet hate of mine. Apart from that one small problem Christopher Hunter does a very good job of bringing the characters to life.
Well worth a listen, especially if you have listened to the previous 3 Kendall mysteries in the series.

I enjoyed the story. The plot was good if a slow. If you like a murder mystery without romance and well explained, then you will enjoy this. Not entirely thrilled by the idea that British police make tea and eat cake everyday. The narrator has never been to England and this is clear. His voice is pretty monotone and he mispronounced a lot of words. With better narration this would be 4 stars. The characters and their relationship are great. The plot is good but the evidence is a little flawed.

John Holt's doggedly determined detective, Tom Kendall, has promised his long suffering secretary and business partner, Molly, an holiday, an extravaganza of sight seeing and shopping: four weeks in London. It will be his first holiday in years and his first time out of the country, apart from a day trip to Niagara Falls. As Molly packs and grows ever more excited, Kendall desperately searches for their passports and tickets which he knows he put somewhere safe.
Of course, once in Eng!and, Molly's dreams of serious shopping and shows are elbowed aside in favour of Kendall's camera as he determinedly drags her to, seemingly, every building and monument in his guide book, taking pictures at each one. Until, that is, an acquaintance is found dead in an hotel room and the detective within him simply won't accept the verdict of suicide.

The characters of Molly and Kendall are a delight. He has the assurance of being right, even when he's not, despite what the Scotland Yard detective and others might say as he humbles his way, Columbo -like, through interviews, determined to find the proof for his theories, constantly mentally rehearsing his ideas in his head. And bored Molly endures it all, none too stoically, muttering to herse!f, 'Here we go agakn.'
The relationship between the two, more long married couple than detective and secretary, is sheer delight. She pushes and reprimands, he argues, ignores and feels guilty. The solution to the story might be obvious but it is the getting there which brings such ennoyment.
Unfortunately, the narration was less than excellent. Although Christopher Hunter read well with reasonable inflection and a speed which felt perfect to reflect the character of Kendall, at least initially he sounded as if he were fighting off a cold and his constant pronunciation of 'asked' as 'axed' was both disconcerting as well as distracting. His reading of Molly's conversations brought a slight softening of his voice but there was no apparent attempt to bring different voices for any of the other characters Not that this latter really mattered - it was always obvious who was speaking. Not a bad reading overall but it could have better.

I have become a big fan of these slow paced but absorbing and humorous detective stories, full of character and realistic dialogue, of stubborn nosing around as well as vague memory lapses. My thanks to the author for freely gifting me with a complimentary copy of A Killing in the City, the fourth in the Kendall series and, like it's predecessors, fully standalone.
For all who enjoy detective stories or well developed real-feel quirky characters, highly recommended.

The interesting story is ruined by lackluster narration and the repeated use of the word 'axed' instead of 'asked'' or 'axes' in place of asks. I had to abandon the book half way through as it became tedious.