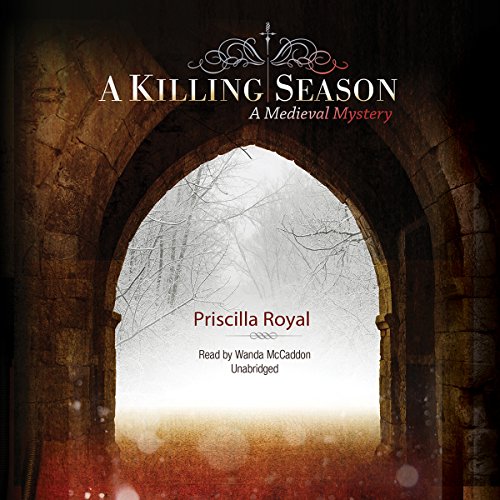 Baron Herbert’s return from crusade should have been a joyous occasion. Instead, he grows increasingly morose, withdraws from his family, and refuses to share his wife’s bed. When his sons begin to die in strange accidents, some ask whether Herbert harbors a dark sin for which God has cursed him. Or perhaps there is a malign presence at this stormblasted castle, oddly named Doux et Dur.

The baron sends for Sir Hugh of Wynethorpe, begging his friend to bring spiritual and secular healers but giving little explanation for the request. Worried about Herbert’s descent into melancholy and the tragic deaths, Sir Hugh persuades his sister, Prioress Eleanor of Tyndal Priory, to accompany him as well as a respected physician, Master Gamel. Although he is pleased when the prioress brings her healer, Sister Anne, he is dismayed to find Brother Thomas included, a man he has reason to despise.

Tensions spark among family members and soon between those who came to help. Death’s scythe harvests more victims, and it is not long before Ecclesiastes’ grim words seem all too apt. But is there also a time to heal?

This is the eighth in Royal's Medieval Mystery series.

What listeners say about A Killing Season

One can hardly be impressed by the unveiling of the murderer when there is only one suspect remaining. Still, I am always engaged in a Priscilla Royal mystery and experience the Medieval mind

The story line is very interesting, but these novels are moving closer to romance than historical mystery.

Would you be willing to try another book from Priscilla Royal? Why or why not?

I am going to have to consider the future novels from Ms. Royal as I feel that the romance factor is beginning to annoy me.

Have you listened to any of Wanda McCaddon’s other performances before? How does this one compare?

I have and Ms. McCaddon is an excellent reader.

Did A Killing Season inspire you to do anything?

I wish Ms. Royal would stick to the historical mystery instead of throwing in a lot of romance and sex. Her earlier novels were excellent and this one was but it seems like her main character needs to leave the convent and find her a MAN.

Thankbyou Ms Royal for these characters. We so need more Prioress Eleanors in our world today.

Wanda McCaddon is an outstanding narrator, but even she can do little with the stilted language of the book.

What could Priscilla Royal have done to make this a more enjoyable book for you?

Do you think A Killing Season needs a follow-up book? Why or why not?

She has a follow-up and I bought it, but I do not expect much.

If you like medieval mysteries, this is a nice new series. The

Could you see A Killing Season being made into a movie or a TV series? Who should the stars be?

No, there is a need for interior dialogue and thought processes so that it is a better book than a film; I do think the main characters could carry a series much like the Brother Cadfael series.

I agree with the previous review. This story was ruined by poor narration. Poor brother Thomas deserved much better. I have struggled before with this reader's pronounciation but persevered because I enjoy the stories but this was by far the worst.

Brother Thomas is a country bumpkin..?

I have enjoyed this series and thought I understood the whys and where’s of Brother Thomas’s conversion to Tyndall Abbey, until this book. He has suddenly turned into a complete Norfike in his accent and sounds 20 years older than the last book.. please don’t do this, it’s unbearable to listen to and makes the whole thing completely change in my mind’s eye.