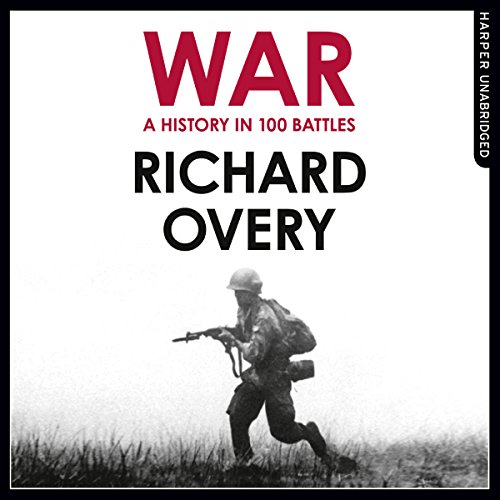 A History of War in 100 Battles

The object of this audiobook is to introduce listeners to a whole range of military history which has all the drama, dangers, horrors and excitement that we associate with Stalingrad or the Somme.

Battles are acute moments of history whenever and wherever they have been fought. Through them we can understand how warfare and world history have evolved. Choosing just 100 battles from recorded human history is a challenge, not just because it is necessary to cover almost 6,000 years of history but because men have fought each other almost continuously for millennia.

Anyone who knows anything about the history of war may be disappointed by what has had to be left out. However, each of the 100 memorable battles described shows both how the nature of armed combat has changed over human history and how, despite changes in technology, organisation or ideas, many things have remained the same.

It is an old adage that you can win a battle but lose a war. The battles featured here almost always resulted in victory for one side or another, but the victor did not necessarily win the war. Some battles are decisive in that broader historical sense; others are not. The further back in time, the more likely it is that an enemy could be finished off in one blow.

The wars of the modern age, between major states, have involved repeated battles until one side was battered into submission. Some of the great generals of the recent past - Napoleon, Robert E Lee, Erich von Manstein - have been on the losing side but are remembered nonetheless for their generalship. Some on the winning side have all but disappeared from the history books or from public memory. Equally, in many battles the issue is not victory or defeat but what the battle can tell us about the history of warfare itself. New weapons, new tactics and new ways of organising armed forces can have a sudden impact on the outcome of a battle. But so, too, can leadership or the effects of a clever deception or raw courage. That is why the audiobook has been divided up into clear themes which apply equally to the battles of the ancient world as they do to the battles of today.

As Professor Richard Overy laments, 'Battle is not a game to plug in to a computer but a piece of living history, messy, bloody and real. That, at least, has not changed in 6,000 years.'

Praise for The Times Complete History of the World:
"One of the great works of historical reference in the English language. If you were allowed only one history book in the whole of your life, The Times Complete History of the World would be hard to beat because it conveys a sense not only of time, but also of place." (Niall Ferguson, Professor of History, Harvard University)
"Wonderfully told history...comprehensive and utterly accessible." (Jon Snow)

What listeners say about A History of War in 100 Battles

A fascinating study of 100 key battles in military history. Many well known and many obscure, the author gives a concise account of each one and its significance it he development of warfare.

Excellent narration. A must for any armchair military buff.

Good overview, a look at history thru battles

Gives a great overview of the history of civilization by looking at battles. An interesting window to view history through. I consider myself a history buff but learned a lot from this.
One complaint... The reading is slow with some long pauses. I turned the speed to roughly 1.35x and it was perfect.
Overall I highly recommend this book.

I kept hoping by battle 99

Not really even good for a long car ride

Would you recommend A History of War in 100 Battles to your friends? Why or why not?

I would not recommend this to friends, but to people I wish to obfuscate, yes

Did A History of War in 100 Battles inspire you to do anything?

Dont keep hoping as the battle numbers increase, it will improve

A casual read that doesn't translate well to audio

This book does what it says on the cover and in the introduction - it presents a series of battle descriptions to give an overview of several main themes in military history. The battles are divided into what Overy sees as the main causes of victory: Leadership, Luck, Innovation, Deception, Courage, and Timing. Unfortunately these categories are poorly defined and don't work well. For example in the "Leadership" battles Overy sometimes points to the planning skill of the leader, sometimes to their personal courage, sometimes to their timing, and sometimes to the their use of innovation.

Overy provides a lot of historical background for each battle, about both the general circumstances and the campaign leading up to the point of battle. This is often at the expense of battle detail itself - even detail that might illustrate the theme.

These problems detract from the book as a serious study of military themes, but it is still a good casual read - great for picking and selecting a battle or two at random.

As an audio book, the listener is forced to listen to the battles in order, and can't skim over any part of the description. The narration is ... odd. Steven Crossley is a very expressive reader, but the emphasis is constantly misplaced. It is as if he has four or five cadences to roll out expressive sentences, regardless of the actual content. Minor details are made to sound significant, and progressions of ideas are broken up by misplaced verbal clues that a climax has been reached. I recommend listening to a decent sized example before purchasing - it can get very irritating after a while.