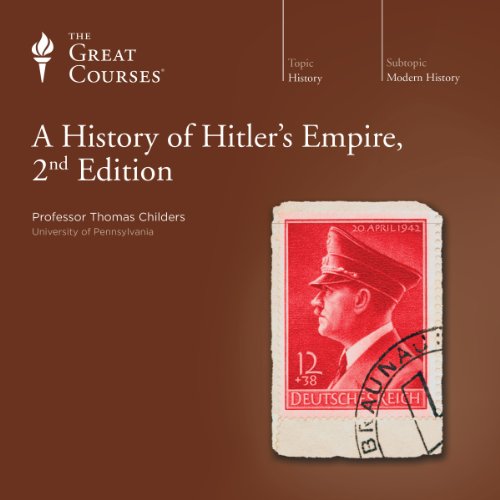 Know thy enemy. That's what the wisdom of history teaches us. And Adolf Hitler was surely the greatest enemy ever faced by modern civilization. Over half a century later, the horror, fascination, and questions still linger:

Professor Childers has designed this gripping 12-lecture course to shed light on these and other questions that have plagued generations. You'll start by looking at the catastrophic impact World War I had on Germany, and how the war and the humiliating Treaty of Versailles crippled the Weimar Republic. From there, you'll turn to the Third Reich – Nazism in power – with an investigation of how Hitler and his henchmen systematically and ruthlessly broke resistance, taking over the major institutions of state power and creating a totalitarian system of terror, propaganda, and pervasive regimentation. You'll also examine Hitler's foreign policy between 1933 and 1939, and discover how and why he puzzled the world by entering into an accommodation with his deadly enemy, Stalin, on the eve of World War II. In the final lectures, you'll focus on Hitler's war against the Jews from Mein Kampf to Auschwitz, dissecting the horrifying racial ideas of the Nazis and the policies adopted to transform those ideas into reality. Finally, you'll learn how Hitler's evil empire was destroyed by Allied might.

What listeners say about A History of Hitler's Empire, 2nd Edition

Childers presents an adequate overview of the Third Reich. It is short, though, so there is not much detail and explanations are given from 'above', focussing on Hitler with very little attention paid to the German people. This is not necessarily bad, but if you do want a more detailed look at the Third Reich then you should look towards the longer Great Courses on the topic.

However, this course does disappoint on 2 important fronts: Narration and Bias.

Narration.
Childers has a very irritating habit of saying "umm" a lot. And I do mean A LOT. He always follows this with a very long pause. It is often so long I would check to see that something hadn't gone wrong with my phone or the app. I played this at 1.5x speed and the "umm"s and pauses were still very obvious and irritating. At normal speed it would have been excruciating.

Bias.
Unfortunately, bias was the major let down with Childers' analysis. Being as this was a course delivered by an American from an American perspective I fully expected there would be a mild amount of bias, given the subject. However, as the course went on towards the American entrance into the war and in particular the Jewish topics, Childers' biases grew stronger and less rational7.

He frequently speculates about Hitler's actions, involvement, and motives; providing nothing by way of evidence to support his opinions. When he discusses the Jews and the Holocaust, he relies even more heavily upon appeals to emotion rather than facts or evidence.

Childers uses a lot of loaded language exposing severe biases. He frequently dismisses allied 'wrongdoings' as being necessary given the situation and wraps then up in euphemistic language. Meanwhile, he often refers to Nazi actions as evil and uses emotive and loaded language when doing so. He frequently makes assumptions of intent based on speculation and outcomes.

I am not a "denier" and it frustrates me that we still can't critique people's opinions on this subject without being labelled as such. From such scholarly sources as The Great Courses and a professor who specialises in the subject, I expected a much greater level of objectivity and professionalism.

Unfortunately, this course just isn't up to the usually very high standards of The Great Courses. I have enjoyed many Great Courses and will continue to do so, however, I doubt I could listen to another course by Childers.

Thomas Childers is an excellent scholar. His early research was on German electoral patterns and the rise of support for the Nazi Party. This short course provides an excellent history of the Nazi movement from its origins in World War 1 through its extraordinary rise to power. Childers places the rise of Hitler's Empire within the context of German politics and society. He covers the party's tactics, Hitler's beliefs, the evolution of racial and foreign policy expertly. There is brief coverage of World War 2 but Professor Childers has another course specifically on this subject.

If you could sum up A History of Hitler's Empire, 2nd Edition in three words, what would they be?

“Forewarned is forearmed.” These are the last words of this lecture series and it sums up perfectly why this lecture should be listened to. In the course of 12 thirty minute lectures, Professor Thomas Childers of the University of Pennsylvania does an incredible job of explaining how the Nazi party rose to power in Germany. Beginning with the catastrophe of World War I, he guides the listener through the terrible economic conditions which confronted Germany. He then discusses how these abrupt changes left the German people looking for a “strong man”, someone who could not be any worse than the Social Democrats of the Weimar Republic. Unfortunately, they found the very worst.
Overall, one of the best lectures from The Great Courses series that I have listened to and would recommend to anyone who wants a deeper understanding of how the Nazis rose to power in such a cultured, sophisticated country as Germany.

What about Professor Thomas Childers’s performance did you like?

I was very impressed with Professor Childers and found his manner of speaking to be incredibly easy to listen to and the entire lecture felt entirely conversational. While I wish the lecture was longer because I was enjoying it so much, I still felt like the material was covered in great detail. I made notes throughout the lecture to guide my future reading on the topic.

The last two lectures which detailed the Holocaust were very moving and Professor Childers was very respectful of the subject.

Informative, but hard to hear

The presenter had a very low voice, and he got quiet at times, so it was hard to hear in my car. Very good otherwise

The material on the political rise of the NSPD was fairly detailed. Everything after 1933 was little more than what you would get from a highschool-level history class.

Well-organized and passionate, especially in the last two lectures when Childers discusses Hitler’s war on the Jews. I listened to this as preparation for reading his history of the Third Reich. He doesn’t cover much detail about the war, leaving that for the Great Courses entry on that subject.

A warning for us all

Professor Childers outlines how Hitler rose to power and slowly eroded the rights of Jews, and others, until no one dared contest him. This should be a warning to us all.

This would be OK if you know little about Hitler

As a lecturer, Childers has some odd speech patterns that may put people off and I had the feeling his books may be better. I just finished reading the lecture notes which were good at reinforcing the lectures.

Overall, I was not satisfied with the lectures but when I bought them, I thought that could happen as 12 lectures aren't enough for such an important time in history. I learned a little but not a great deal. I have many lectures from The Great Courses and this may be the weakest one I have encountered.

Just a great overview of this terrible chapter in history. Easy to listen to, entertaining and intelligent. I highly recommend this book.

I gained a much better understanding of how the outcome of WWI lead into the WWII.

These lectures are compelling, clear and informative. The lecturer is excellent and very engaging. I only wish the course was longer and more detailed as I learned an enormous amount from it. I will certainly seek out other courses by this speaker.

I studied this era as an undergraduate. The lecture series has answered all my nagging questions and effectively filled many of the gaps. It has also given me the interest to renew my reading of the subject matter. The lecturer engages you and keeps your interest throughout the series.