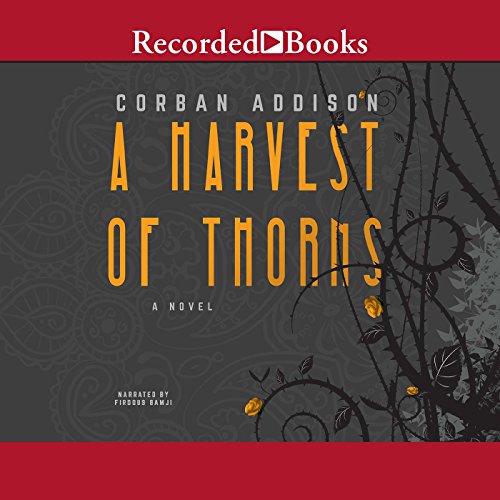 A Harvest of Thorns

Corbin Addison explores the human stories behind global labor sourcing in the international fashion industry in this thrilling, shocking and compelling tale.

A beloved American corporation with an explosive secret. A disgraced former journalist looking for redemption. A corporate executive with nothing left to lose.

In Dhaka, Bangladesh, a garment factory burns to the ground, claiming the lives of hundreds of workers, mostly young women. Amid the rubble a bystander captures a heart-stopping image - a teenage girl lying in the dirt, her body broken by a multi-tory fall, and over her mouth a mask of fabric bearing the label of one of America's largest retailers, Presto Omnishops Corporation. When the photo goes viral, it fans the flames of a decades-old controversy about sweatshops, labor rights, and the ethics of globalization.

A year later, in Washington, DC, Joshua Griswold, a disgraced former journalist for the Washington Post, receives an anonymous summons from a corporate whistleblower promising information about Presto. There, to Griswold's astonishment, he meets Cameron Alexander, Presto's longtime general counsel. Alexander, who has secrets of his own, offers Griswold confidential information about Presto's apparel supply chain. For Griswold the challenge of exposing Presto's willful negligence is irresistible, as is the chance, however slight, at redemption. Deploying his old journalistic skills, he builds a historic case against Presto, setting the stage for a war in the courtroom and in the media that Griswold is determined to win - both to salvage his reputation and to provoke a revolution of conscience in Presto's boardroom that could change the course of the fashion industry across the globe.

What listeners say about A Harvest of Thorns

This is my third Corban Addison book, and I have previously enjoyed his writing.
I can't quite put my finger on why this book didn't capture me as much as "A Walk Across the Sun" or "The Garden of Burning Sand".
It started off with a vivid and terrifying description of a factory fire and the public relations nightmare that ensued.
And then we meet a group of corrupt business executives and "heroes" facing tragedy.
And they talk.
And talk.
And talk.
I've gotten two thirds of the way through the book, which shifts forward and then backward and then forward with another character, and the "good guys" are blackmailing the corrupt ones (most of whom are of Bangladeshi or Middle Eastern descent).
I got to the point where I got bogged down with all the tragedy and the conversation and the blackmail, and I don't think that's the direction the author wanted me to go.

LOVED this book!! It was frightenly informative.

This book was so enlightening about the textile industry. I think many of us suspected much of what was discussed in the book but tying it to actual real life people (albeit fictional) was what I needed to take action.

An important issue but...

While I think it's amazing that Corban Addison is drawing attention to a worldwide issue about the horrors of the clothing industry, I felt the story could be improved. I loved his previous books and have read all of them, especially a walk across the sun, but this one fell short for me. Also I didn't love the narrator. He could have been more animated. I felt like there wasn't a lot of character development unfortunately in this story and would have loved to hear more of the story from other perspectives (perhaps a females perspective) besides the 2 main characters, Joshua and Cameron both American men. Perhaps that's why I enjoyed a walk across the sun more. It was difficult to follow the story line for me as I would pick it up and go back to it often and it jumps around a lot. Overall, it was difficult to finish for me, especially this audio book version. I will still read his new work if he publishes again, because I like his themes of social justice and privilege and often find I learn a lot while reading.

I was captivated within the first 15 mins! The heart breaking stories evolved and touched my heart in a way that caused me to take action!
Thank you for such an enlightening story!

At the beginning I wasn't sure if this was fiction, because it seemed so real. I suppose that's because this novel IS real, even if the characters are fictionalised. There is no pretty ending, and it ended up making me feel pretty impotent - but it was a magnificent read. I highly recommend it.

Didn't want the book to end!

Really great listen! I love Addison's work and this might be my favorite of his. I was so sad when the story ended. The narrator did a really amazing job as well! "AUDIBLE 20 REVIEW SWEEPSTAKES ENTRY”

Well written, well researched and well put together. Abuse is not a surprise to most readers I am sure, but the process that creates the abuse is one for consumers to think about.

This was an excellent and we'll told story of the struggles those making our clothes have. It has plummeted me into an ethical delema when I go shopping now. Read/listen to this book but prepare to be challenged.

This novel was inspired by real events - a horrific fire in an overseas clothing factory making clothes for western countries / suppliers. It starts with the fire itself which is gripping and emotional but then the story shifts to become a personal quest of Cameron - a manager at one of the clothing companies. Into the mix is added an eager journalist. This tactic allows the reader to see both sides and the horrible, yet believable reaction of a supplier (self preservation). It also offers insight into our world, the media and consumer behaviour - customers pay lip service to the tragedy whilst lining up to grab bargains. However for me, I found Cameron an unbelievable character and the story only fleetingly goes back to the factory workers' stories. More of a dual narrative really showing their lives, the hardship and impact of the fire would have been good. Also i think it missed making the point that solutions aren't as easy as a boycott of clothing manufactured outside western countries. The story makes you think but doesn't go quite far enough.

The narrator did an okay job but his pacing was too slow so I listened on 1.25 speed. He just sounded rather bored of the subject matter. Although a serious topic, more life /variation of tone was needed for this fiction book.