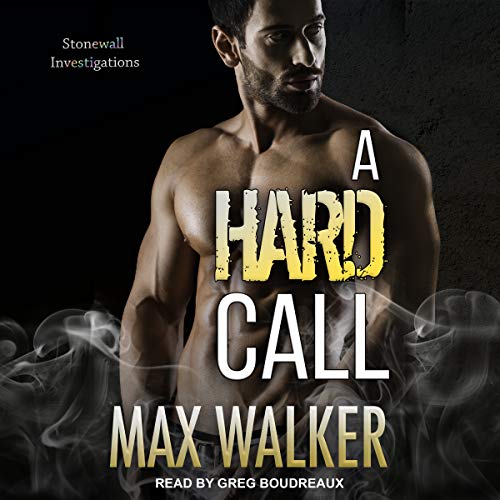 Zane Holden hasn't had the easiest go of things. His childhood was rough, and adulthood hasn't been a walk in the park, either. The only good thing in his life would be Stonewall Investigations, an investigative company he found to work primarily with the LGBTQ community. Things were okay, and Zane was finally healing from a personal tragedy, but the reemergence of a serial killer turns his world upside down.

Lorenzo De Luca is a cocky defense attorney dripping in Italian charm. He's well known as one of the best lawyers in New York City, a title he worked hard to achieve. When he picks up a difficult case, he finds that he needs extra help. This leads him to Stonewall, where he meets Zane for the first time and instantly feels himself falling for the mysterious and stone-cut detective.

The two men have their own hangups to work through, but both men are having a hard time denying the connection between them, even though they're trying. When fate insists on pushing them together, Zane and Enzo give in and start exploring their feelings. They'll need to balance their budding relationship with the stress of Enzo's case, which takes them both on a twisting journey toward the truth, all while a bigger threat looms on the horizon.

There were a few great laugh out loud moments. As a gay man I enjoyed the subtle nuances that the author brought to the story.

I got a little confused to begin with at the two different "voices" or storylines. However, once you get used to the switching perspectives, it's quite a good device for moving the story on but keeping it personal.

Unlike a other novels of this type that I've read this has a strong story line. There is a good balance between romance, drama, the detective narrative and the inevitable bedroom scenes.

It is romantic, touching and mostly believable. Just occasionally you see the artifice poking through.

It's said that Zane started Stonewall Investigation some ten years ago so you'd think that with all those years of experience the dude would have figured out the obvious when all his investigative clues pointed everywhere but at the guy in jail or the gang member. By then I, the reader, had figured out who the murderer was but no, not the experience PI. And really, what PI just sits there, comfortably in a chair, when the person he's interviewing suddenly gets up and locks the door. The mystery was obvious, too many clues for it to go unnoticed. Zane unfortunately wasn't able to solve the case. Really, the murderer just ended up giving themselves away.

Regarding the relationship between Zane and Enzo, it seemed to have moved very fast because the author skipped days and weeks off pages. So it made it look like it was insta-love. But there was some timing in the process, it's just the readers weren't privy to such time. i'm not a fan of authors who tell things off page because we didn't get to experience any real development between the MCs. By the time I knew, Zane and Enzo were already saying "I love You". Bad story and characters development pacing here. I ended up stopping four times because the 'Just Tell' antics used here bored me. I did finish it though. The thing is, I read the other book from the new series, Stonewall Investigation in Miami, first before reading this one. And I liked the Bad Idea book just enough which prompted me to come back to the original series. I couldn't stand this book however. And since I now have a sense of the author's pacing and writing for Zane and Enzo's crime solving and relationship continuation I won't be continuing with this original series. Zane and Enzo, or the New York's office 's plot and pacing just doesn't interest me enough. I will maybe, and it really is just a maybe, continue with the Stonewall Investigation in Miami series. The problem I have with Max Walker is that the guy moves his story along way too quickly. There's not much room for development since he does more telling off the page than allow us to embark on a journey with his characters. Walker's main focus seems to be reaching a clean ending as fast as he can and this really kills it for me because I fell like he could do so much more with the setting he has for both investigation offices. I have a feeling he's going to be another author I'll likely drop.

Loved Enzo....Loved Zane...Loved the story...the narrator was fantastic...wonderful start to the series...5 plus plus plus stars

Strong men, powerful passion, intriguing story-line and heat melting romance make a terrific story! Well written with amazing characters and a gripping story-line that kept me reading all the way through in one sitting.

Zane and Enzo are so combustible together that you can feel the sizzle on your kindle. i really liked how we got to know these guys and i fell in love with both of them. i so want more of these men!

I really enjoyed this book. Both characters were extremely likable and together a great “power” couple. The story kept me engaged and on the edge of my seat. I even laughed out loud with Alonzo’s parents antics. Great read

Picture a Film Noir with a twist (a MAN walks into a gay friendly, detective agency), sitting at the desk is a beautiful hunk of manhood, sexy lips, five o'clock shadow, chiseled jaw, lap begging to be sat on. Enzo is so taken with Zane that he ask him out and is shot down.

Zane is still recovering from the love of his life being murdered by a serial killer several years before. The killer has apparently reemerged. Taking away the peace he has achieved. They meet again when Zanes brother saves Enzo from a crazy person bent on revenge. They spend the night getting acquainted. Tasting a bit of each other for the first time.

Zane tells himself they are just working together trying to clear Enzo's client. Fighting his attraction is getting harder every time they meet and Enzo isn't making it easier.

There is peril for our heroes but you know one or the other will save the day.

Cazzo, (you will have to read the book to see what that means) these guys are really hot. I loved their cheesy lines and their snark. Through the whole book I felt like I was reading a pulp fiction paperback and enjoyed the hell out of it (although I seriously doubt Mike Hammer would of visited the Museum of Sex). This was fun. Looking forward to the next book in the series.

loved it.... this book was great had mystery love action everything that makes a wonderful story. cant wait for the next book.

This is a great first book to a series and the narration is perfect! I definitely recommend checking this series out.

These 2 are NOT to be missed!

Ok this Narrator is an instant One click for me.

I hadn't ever read Max Walker before, but was looking for something that Greg Boudreaux Had Narrated and to be honest figured why not.
I wasn't disappointed I love this book, the storyline was so brilliant leaving the Unicorn uncaught for the next book, who knows the whole series?
I will be getting the rest of this series, I have to say some Narrators just make a story and that was it for me,I have bought a few books I would never have found because of that.