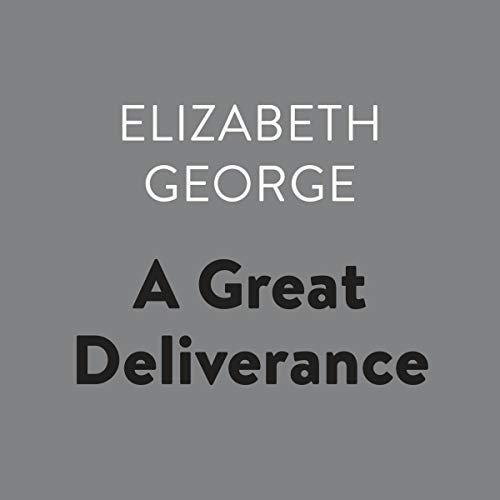 To this day, the low, thin wail of an infant can be heard in Keldale's lush green valleys. Three hundred years ago, as legend goes, the frightened Yorkshire villagers smothered a crying babe in Keldale Abbey, where they'd hidden to escape the ravages of Cromwell's raiders.

Now into Keldale's pastoral web of old houses and older secrets comes Scotland Yard Inspector Thomas Lynley, the eighth earl of Asherton. Along with the redoubtable Detective Sergeant Barbara Havers, Lynley has been sent to solve a savage murder that has stunned the peaceful countryside. For fat, unlovely Roberta Teys has been found in her best dress, an ax in her lap, seated in the old stone barn beside her father's headless corpse. Her first and last words were "I did it. And I'm not sorry".

Yet as Lynley and Havers wind their way through Keldale's dark labyrinth of secret scandals and appalling crimes, they uncover a shattering series of revelations that will reverberate through this tranquil English valley - and in their own lives as well.

"Pure entertainment from its insidious beginning to its gripping end." (The Washington Post Book World)

A fan of British crime stories, this one is one I wish I’d passed up. ☹ It could have been told much more tastefully, kindlier, and in a way that the listening/reading audience would have been able to rally round. From beginning to end, this is a woeful tale, and I figured out pretty quickly what had happened, and still had to listen to the heartbreaking details. I still have no idea who was delivered from what. No redeeming qualities here.

too brutal an D graphic<br />

it is sad that Elisabeth George feels it is important to tell us every detail of aberrant behavior, in this case pedofilia by a father to his children. Do we really need to know about this, not to mention every disturbing detail? This is second time I've been burned by a George mystery. No more!

First time author for me, debut novel for the author. I first heard about Elizabeth George from Audible's suggestions for books you might like based on others you've listened to. And, my wife's book club was reading another book in the series at that time so I decided it must be fate for me to try a new author. When I find a new author with a series I have to decide whether to start with the book I found or go back to book #1 in the series. In this case the series looked good enough, the ratings were good so I went for book #1, this one.

It turns out the author is a Yank, born in Ohio, raised in the San Francisco Bay area, UC Riverside for an English degree and basically living around LA after that. She appears to fit into the category of American authors that write books set in the United Kingdom. There are actually quite a few.

A lot of times a new author writing the first books in a series take some time to find their voice and over a period of time, hit their stride and really take off. The jury is still out on Ms George. This book took off slowly in my mind. It wasn't until several chapters into the story that we even meet Detective Lynley who is to become the focus of the series. And, getting to know him is somewhat slow in developing. Bit by bit you do get to know him but I suspect there is plenty more to come.

Still, somewhere around the two-thirds point of the book, when Lymley really starts focusing on the murder and begins to unravel the mystery the book becomes very engrossing and you are then caught up in it and it becomes a page turner. This last part of the book is very intense, very good listening. I did thoroughly enjoy it in the end, enough so that I will go on to the second book in the series.

Also, in my research I discovered that many of the early books in the series were made into a British TV series. I suppose it can be found somewhere in the online streaming world but I might wait a bit until searching that out as sometimes TV or movies can distract you from the books.

This story did not hold a lot to engage the reader's ongoing attention to begin with, but the narrator made it almost unendurable. It seemed like she was trying to speak as fast as possible. There was no paced storytelling. She used the same voice for the text as for the dialog of the male protagonist. I could never tell when he was speaking. The speaker ignored tone and inflection cues from the author. Phrases like, "she said quietly" seemed out of place after the line had already been read without indication of quiet.

The story was enthralling with a "didn't see that coming" ending. Excellent narration as usual.

The Narrator Tells the Story

Ms. Peters is apparently a well-respected narrator. I have issues with her performance. Her voice rises in emphasis to positively shrill, and her drawl is inevitably supercilious. Perhaps she is just accurately reflecting this particular author. Ms. George's books have ugly moments, many just downright mean. Transparent attitudes (e.g., her depiction of Roberta). These attitudes have grown exponentially in subsequent best-selling books, each more carelessly written. To my taste, Ms. George has problems with character development, relying progressively on unrelenting, interminable internal monologue, primarily for those characters afflicted with popular attitude-engendering characteristics. It gets worse as the series progresses. I don't mind ugly people in my books, but jeepers, it would be nice to like someone in this deteriorating, unfortunately lucrative, morass. So, perhaps, Ms. Peters is just absolutely accurate to the true sense of the books. If so, it's a shame, because I avoid anything she narrates.

Could not listen to one more word. Love the author though. Will try again someday.

I loved this book! It's very meaty, at times intense, very suspenseful. The narrator did a great job. I was thoroughly engaged through the whole book. It's definitely not a cozy, but I would sincerely recommend to mystery lovers. I can't wait to get to book 2.

I'd seen the episode on TV many years ago. So decided to go back and read the series. It's a very good start but I must say the story is a little dated. I'm sure in the late eighties it was more shocking than it is now. For fans of the series the 1st novel is a must read but it might not be the best. And that's not a bad thing since there's more to look forward to.

I admit to selfishly listening to innumerable books and never writing reviews BUT I must comment on how wonderful this narrator is! moreover, Elizabeth George the author is brilliant. so many layers and nuances to this book with an ending that ties all the loose ends and punches anyone with a heart in the solar plexus. absolutely 5 stars on every level. so glad she has 20 books as I am immediately going to move to book 2 and ANY book narrated by this woman in the future.