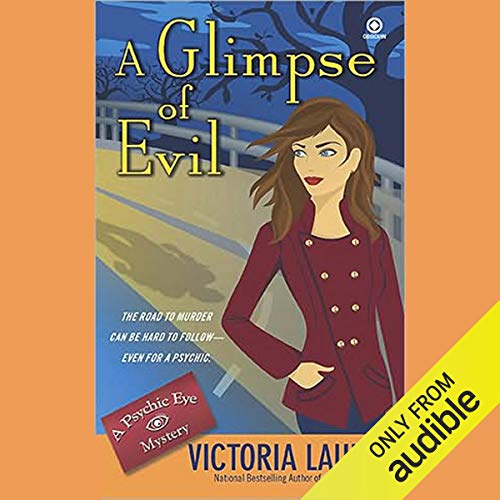 A Glimpse of Evil

A Glimpse of Evil

Professional psychic Abigail Cooper is about to discover that some cold cases are better off dead....

As the FBI's newest civilian profiler, Abby Cooper is using her powers of intuition to help solve a backlog of the bureau's cold cases. But when she's the only one who's convinced that several separate cold cases are related, she'll have to call on every intuitive bone in her body before she's the one put on ice.

I really enjoyed this book and I think it might be the best in the series so far. The plot changes in the book seems natural. Abby is also growing up more. I look forward to the next book.

These books just keep getting better and better! The Narrator is perfect and does exactly what I think "Abby" would actually sound like (if she were real) After buying and listening to the 1st book, I loved it so much that I bought the whole series and I must say, there are NO Regrets! It'st a delightful way to spend time in traffic, doing chores or stopping for a break at work. My Spirit Guides are telling me "Read or listen to everything she writes, you WON'T be disappointed" Can't wait to start on the new book "Vision Impossible" it's getting great reviews already!

The gang moves to Austin, one by one

It's almost too much to believe that Abby and her FBI boyfriend Dutch would both find jobs in the same FBI office in Texas as opposed to Michigan AND be followed individually by home contractor Dave, Dutch's old best friend from the police department, while Candace preceded them there and had already bought her condo as had Bryce, Dutch and Abby's boss. They all arrived separately but coincidentally for all different reasons.

It felt a lot like old home month, but the office was a new environment for Abby. She was working with the cold case squad, and by weeks' end had reached the group's goal for the year! Abby didn't do that alone nor did she claim to. However, her boss Bryce, also Candace's boyfriend although they both were too unsteady to admit that, changed the group's methodology in that same first week.

Bryce immediately saw the value in Abby's skills. He had her prepare a lecture/lesson for the squad to show and teach her intuitive ways. No one showed up. However, they all went the following week when she taught them how to gain access to their own feelings. With the interactive fashion of &quot;show and teach,&quot; the group was much more enthusiastic.

Candace and Abby began working a case of three missing and likely dead pre-teen girls. It became entangled in a dangerous accident, distraught friends, and an ex military man. A group back at the squad was working another case that Abby also felt was at some turning point at the same time. The excitement and anxiety ratcheted up and up.

I can only tell you that the solution caught the eye of several higher ups who want Abby to save her country. How? I think we have to read onward to find the answer.

I love this series. I think the ridiculous & often foolish things that Abby & Candace sometimes do make them that much more endearing because, let's face it, we all do stupid stuff once in as while. The only complaint I had, was that we didn't see enough of Eggy & Tuttle... their little nose bumping, barking, and snuggling as so much to their life at home. Hope we see more of them soon😊

Abby show's them how it's done!

A Glimpse of Evil takes us into the hearts and minds of the three main characters, Abby, Dutch, and Candace. In this latest adventure, it's a deeper look into their relationship connections, along with their crime fighting.

Abby and Dutch arrive in Texas looking forward to their new jobs, but also the new life they will be building together. Candace, having already settled in Texas, greets them both with open arms, and a hand full of her new love interest. I'm not going to name Candace's new boy toy because I don't want to spoil the surprise for you!

Abby was not at all expecting her new job as an FBI Profiler to consist of pushing papers. When she arrives in the office, she is instructed to "audit" cold case files to see which ones are viable to continue with and which ones are not. Abby of course is, yet again, met with non-believers of her abilities in the office and will not be taken seriously until she "proves" herself to them. People are such jerks sometimes! Abby turns the table on her assignment and creates her own audit system, which she is then brought into Agent Harrison's office to explain. After a lengthy discussion about the new audit, Harrison agrees, and Dutch and Abby proceed to close three cases on their first day!

Candace is setting up camp as well, with a new condo, car, and applying for her P.I. license for Texas. She is happy as a clam with her new bow until one thing leads to another and the fighting begins! Abby and Dutch face some shaky ground as well that has Dutch really taking stock of his life and his future with Abby. Having everyone in turmoil throughout the book had me very unsure of how things would turn out! Abby and Dutch are so meant for each other, I was rooting for them big time! Listening to one conversation between Abby and Dutch, that brought Dutch to tears, had me in tears! Getting everyone to open up about their true feelings and get on the same page felt like it was never going to happen, and all of this while they are working cases that have one of them pointing a gun straight at Abby once again.

This book has been such an eye opener for me on how the relationship between the characters has evolved since this series started. I love the direction the books have taken everyone, especially Abby. You will not be disappointed with the surprise nuggets in this chapter, and there are more than one ;)

This is eight audiobooks now for me, same series, same narrator and Elizabeth Michaels is Abby Cooper! I can't imagine anyone else, nor do I want to. Elizabeth fits the bill perfectly and I wouldn't change her for the world! Great job Elizabeth!!

Would you try another book from Victoria Laurie and/or Elizabeth Michaels?

The narrator cannot pronounce words correctly to save her live. For instance, one of the most annoying mispronunciations for me is cavalry. She keeps pronouncing it as Calvary. When you want help don't ask for a biblical location! Her voice is also nasal and she sounds like an old woman. If I didn't like the series I could never put up with her.

I loved how the story developed and the ending was most beautiful. I just wish the narrator was better at using different voices.

This is a really good series. Interesting characters. Good mysteries. I'm already listening to the earlier books a second time.

I listen to a lot of audible books as I work and when I am doing chores - I have enjoyed every one of her books so far!

loved it, great characters, brilliant plot with a lot of twists and turns. highly recommended