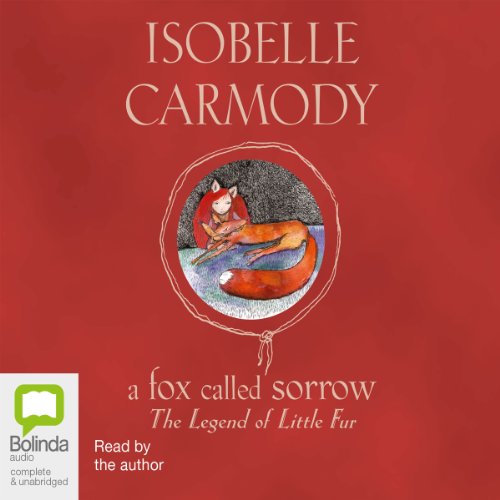 A Fox Called Sorrow: The Legends of Little Fur, the second installment in Isobelle Carmody’s Little Fur series sees the elf-troll Little Fur traveling under the city to the troll kingdom of Underth.

While trying to intercept the Troll King, whose evil plans threaten humankind, Little Fur must also accompany the sad fox Sorrow and use her powers of healing to help him overcome his anguish.

Carmody uses a lulling, sensitive delivery to perform her own work, which will win over fans of children’s fantasy with its evocative imagery and its message of determination and friendship.

A half-starved fox was limping towards the outskirts of the sprawling grey city over which the storm spread its black and ragged wings. It stopped to sniff at the wind and read the warnings and signals, but its anguish was so great that if the world were to end it would not have minded. It limped on.

The fate of the elf troll, Little Fur, becomes entangled with the mysterious fox, Sorrow, who longs only for death. Together they must travel to Underth, the troll king's underground city, on a dangerous quest to uncover his evil plans. The wise Sett Owl has foreseen that the future of the earth spirit, and perhaps all living things, depends on the success of this quest. Led by a greedy, devious rat, how can they succeed? But how can they fail, when so much is at stake?

The second captivating book in The Legend of Little Fur series.

"Little Fur is an endearing little creature... the novel reads as a gentle fable that children from eight to 10 will enjoy." - ( Australian Bookseller & Publisher)

What listeners say about A Fox Called Sorrow

Engaging story but seems an attempt to slyly indoctrinate kids about an overly mature topic.

My 5 year old daughter has been listening to the first book of Little Fur for over a year, so it was time we got the second one. It is such a delight to listen to Isobelle Carmody reading her own book (and being Australian, it's great to hear Australian readers as well as US and UK accents). A great story that because of it's length we can listen to again and again to get more out of it each time. I'm sure my daughter only picks up a little each time (depending on what else she's doing at the time), but she plays and listens and eventually knows the story.