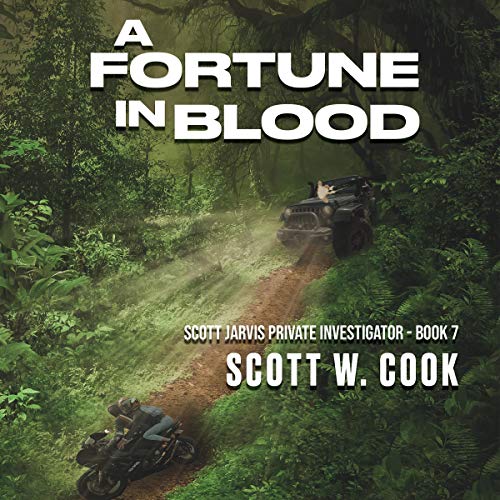 A Fortune in Blood

The tropical jungles of Central America teem with betrayal, lust, greed, and international intrigue that threaten to explode and take everything Scott Jarvis loves with them....

Florida private investigator Scott Jarvis is finally getting his life back on an even keel after the harrowing end to his search for a Nazi U-boat. When he gets a call from his friend Clay to come down to Costa Rica and visit, it seems like a much-needed change of pace - yet something is brewing beneath the surface.

Miles Palmer and his ex-wife Andrea are battling for control over their multi-million-dollar, multi-national green technology company. With so much at stake, both estranged spouses are plotting to prove that the other is incapable so that they can wrest total control of EcoLife for themselves. Unfortunately, Clay Delaney and his family are drawn into this struggle for power that threatens to turn deadly and exposes an international plot that could destabilize the entire Central American Isthmus.

With time running short and little to go on, Scott Jarvis must smash his way through the lies and mysteries and avoid death at every turn before Clay, his wife, and his three children become the first casualties in a bloody revolution and fight for ultimate power!

Tensions mount and bullets fly in this non-stop mystery adventure romp through the jungles, mountains, and rivers of Costa Rica and Nicaragua!

What listeners say about A Fortune in Blood

Perfect book for a road trip!

This was another great story in the Jarvis line! I listened to it on a road trip and found I didn't want to stop for the night because I wanted to keep listening! It is definitely a steamy adrenaline rush that you won't want to end. Keep your head down Jarvis, I can't wait for the next one!

A great adventure in an exotic locale

Well, it took some getting used to the new narrator, but I think Dave is doing a great job with Jarvis and friends. There's a great energy to this book and the read. I highly recommend it to any action, adventure, crime and thriller lovers out there. In my opinion, this mystery action series keeps getting better with age.